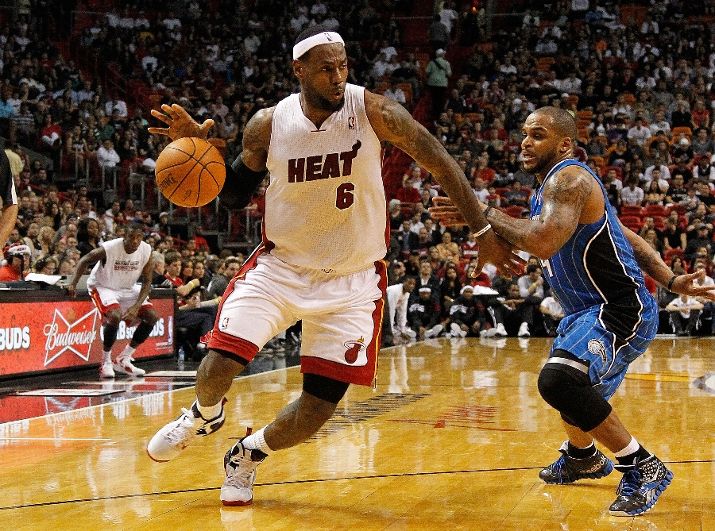 After a competitive first quarter that ended with the Orlando Magic leading by a point, the Heat subsequently put up 32, 29 and 36 points in the next three quarters while their home state rivals fell flat with little in terms of offensive creativity and precious little from seemingly disgruntled center Dwight Howard, who did practically nothing after putting Joel Anthony and Dexter Pittman in early foul trouble with two fouls each at the opening of the opening quarter. The Heat never looked back and a blowout was in order to the tune of 118-85, the first loss for the Magic since 2008 in the preseason - a span that lasted 21 games.

"It was encouraging and good for our guys to get out on the court and play against somebody else," remarked coach Spo. "They've been hitting against each other all week long. I think they were excited about the opportunity...to put on the white uniforms and play in front of our fans."

The Big 3 each showed flashes of their true games tonight but it's obvious they weren't playing at full speed. Last season, a combined 47 points from the three superstars may not have been enough to seal a win with their limited supporting cast. This time, solid contributing performances from Udonis Haslem, Mario Chalmers, rookie sensation Norris Cole and surprisingly Dexter Pittman provided a needed boost off the bench. And that's not even counting the second half barrage from training camp invitees Terrel Harris (16 total points, 5-7 FG shooting, 4-5 from beyond the arc) and Derrick Byars (12 points, 5-6 shooting) that helped turn this into a blowout of epic proportions in the second half. Even better, the bench will soon be bolstered with the Heat debut of Shane Battier and the eventual return of Mike Miller.

"The adrenaline and the energy was pumping early on, our starters set the tone," continued Spoelstra. "Then the young kids came in there and took advantage of the opportunity. They've been working extremely hard all week long. They've really been getting after it, they're athletic, they play with energy, they play with passion, they try to do things the right way, they're very coachable. That's always great to see young guys, when they get their opportunity, to make the most of it."

Yes, it's only a preseason game. Against a fractured Orlando Magic team facing an uncertain future with or without their superstar. But perhaps the fears over the Heat's lack of depth at the center spot may have been a bit overblown, even with Eddy Curry lurking in the background. Howard only mustered up 5 points against the likes of Joel Anthony, Pittman, and Bosh (forced to the 5 spot early because of his teammates' foul trouble). If it wasn't a big deal tonight against a team with an elite center, then Spoelstra might be able to get away with it for another season. Maybe that's wishful thinking but on a night like this where just about everyone was firing on all cylinders, the pressure was squarely on the other team to counter the various weapons the Heat had at their disposal. James had his midrange shot on target, Bosh displayed some silky moves around the basket, and Wade did what he wanted at times thanks to an aggressive attack mode towards the basket. Sure there was some question marks, Joel Anthony (6 minutes, 0 points, 4 fouls) primarily the biggest one, but if this is what the Heat look like shaking the cobwebs off, the Eastern Conference and the NBA in general is in big trouble.

"The adrenaline was running, we were excited to get out there," said Wade afterwards. "Just having a chance to play and you've seen all the hard work the guys have been doing. We try to bring it out to the game. I liked the things our team did today. It's pretty much just doing what coach asked us to do. Defensively, stay on top of our principles and offensively, try to get into a flow and a comfort zone and we did it."