Throughout last season, the Miami Heat built huge leads only to exhale and allow the opponents to come back and win the game. It happened when the Utah Jazz and Orlando Magic rallied from 20-pont leads to beat Miami. Even after the Heat had a 15-point lead in the fourth quarter of the 2011 NBA Finals Game 2, the team relaxed and let the Dallas Mavericks get back in the game and win it. 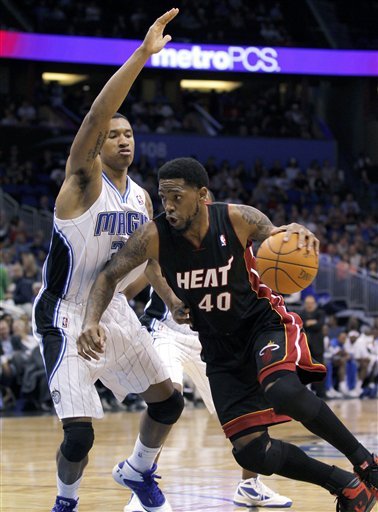 Playing out much like a repeat of those games, the Heat opened up a 23-point lead over the Orlando Magic early only to see it evaporate in the second half. Erik Spoelstra played his starters during the third quarter, but let the reserves try to win the game in the fourth. Orlando’s benchers helped secure a 104-100 win.

Spoelstra can take positives and negatives from this game. To start off the game, LeBron James and Dwyane Wade went to their post games and delivered, helping the Heat score the first 12 points of the game. Miami additionally ran to contest jump shots, and the Magic missed their first 12 field goal attempts. Part of the team’s effort to play more up-tempo this season, the Heat also quickly brought the ball up court, even after made shots.

Starting at the end of the second quarter, Miami’s defensive rotations became slower, leading to open jumpers for the Magic shooters. Dwight Howard played much better than he did Sunday, scoring on several dunks to finish with 15 points and nine rebounds in 28 minutes. But Glen Davis truly sparked the run, scoring 18 points on 7-of-8 shooting from the field.

The Heat players also took some questionable shots in the second half. At the end of the third quarter, James attempted two straight ill-advised shots that touched nothing but air. Prior to those two shots, the Heat’s last two starting small forwards – James and Quentin Richardson – had a skirmish after James made a jumper in Richardson’s face, leading to a technical foul on Richardson. After those two air balls, Richardson taunted James.

This game was an exhibition, and this game doesn’t mean that Miami will blow leads and have James play sub-par games in the playoffs. The two-time MVP actually had a good game, finishing with 27 points on 9-of-16 shooting and 9-of-12 shooting from the foul line in 30 minutes. One of those missed free throws was an air ball, though. But James offered little other than scoring. Chris Bosh shot just 2-of-8 from the field, even missing five free throws, which is odd considering he shot 82 percent from the line last year. On the positive side, Bosh did have seven rebounds in 29 minutes.

Wade was the most effective of the Big 3. He shot 6-of-12 from the field, made nine of his 10 attempts at the foul line to finish with 21 points, and also contributed five rebounds and four steals. Another positive for Miami was Mickell Gladness, who received additional playing time because Dexter Pittman was a late scratch with a quad injury. In nine minutes, Gladness had six rebounds and three points. Although Gladness appears like a long-shot to make the roster – Miami will probably have Eddy Curry in addition to Joel Anthony and Pittman on the roster – Spoelstra may invite him on the plane to Dallas because of his rebounding. Gladness was also a training camp invitee from last year's team. Terrel Harris and Derrick Byars, the standouts from Sunday’s game, were rather pedestrian Wednesday, combining for just three points.

Norris Cole continued to show promise, scoring 11 points on 4-of-9 shooting, even making a nice shot over Dwight Howard. Cole also only had one turnover after coughing up the ball four times in Sunday’s game. He changed speeds in tonight’s game instead of solely running in the home game, which had him commit a few offensive fouls.

The Heat will kick off the regular season Dec. 25 against the Mavericks. The team will waive two more players before that game.