Share All sharing options for: Heat Start Season With Dominating Win Over Mavs 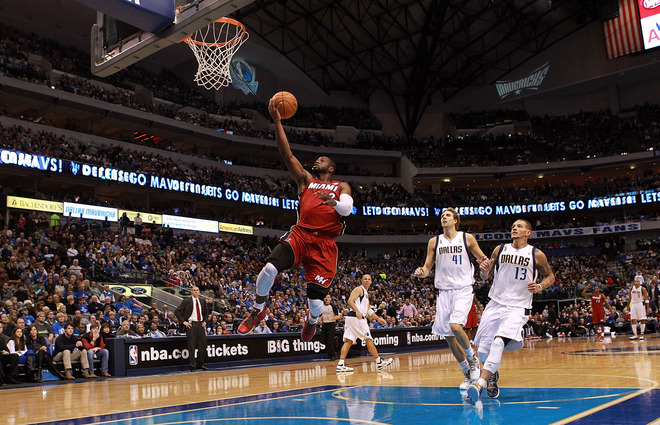 The Miami Heat entered the opening game of the 2011-12 season having lost to the Dallas Mavericks in every regular season game since 2004. The Heat put a stop to that streak Christmas Day, building a 35-point lead and winning 105-94 to start the season 1-0.

The final score is not indicative of the way the game went at all. Miami dominated the lethargic Mavericks for the first three quarters, playing active defense and getting easy transition points. Dallas significantly cut into the lead during the fourth quarter, but the Heat still had a 20-point lead with five minutes left in the game. Erik Spoelstra emptied his bench with fewer than three minutes to go, and Dallas cut into the lead again. But for the Mavericks, it was simply too little, too late.

This game was strikingly reminiscent of Miami’s first game against the Cleveland Cavaliers last year, when the Heat players used their athleticism to create stops on defense and score fast-break points. In one second-quarter sequence, Wade came over as a secondary defender and blocked a jump-shot from Dirk Nowitzki. He initiated a fast-break and passed the ball to James, who gave the rock to Chris Bosh for a driving dunk. In the third-quarter, Mario Chalmers stole the ball from Nowitzki and threw a lob pass to James. The two-time MVP wasn’t in a position to slam the ball, though, so he just tapped the ball to Wade. The 2006 NBA Finals MVP proceeded to jump and dunk it. Perhaps people will coin it as a double alley-oop.

Prior to the season, Spoelstra said that he would institute a more fast-paced game to the Heat. Some questioned his decision to allow the Heat players to freelance on offense more, but Miami’s new offense worked to perfection. Even when Miami did not work off of turnovers, the Heat’s offense worked well. For the first play of the game, Wade found a cutting James for a reverse layup. Moreover, the Heat simply played with more energy and intensity, dominating the battle of the boards 51-31. Udonis Haslem grabbed 14 rebounds, six of which came on the offensive side of the ball, frequently tipping in missed shots.

Haslem scored nine points in addition to his big rebounding night, and the Heat received some timely contributions from the bench players. James Jones made three 3s in the first half to build the lead. Norris Cole started his NBA career with confidence, nailing a 3-pointer as his first professional basket. He even led the fast break for a nice layup despite getting fouled. Cole changes the pace for Miami, similar to what J.J. Barea did for the Mavericks last year.

This game was not without its flaws, however. Bosh struggled mightily with foul trouble, scoring just four points on 2-of-9 shooting. His jumper was off, but it was good to see Bosh grab seven boards in just 24 minutes. Good players find ways to contribute if they don’t play well, but the Heat need more out of Bosh to succeed. Joel Anthony out-scored him.

Miami’s other glaring blemish from the game was the turnover problem; the team had 23 mishaps with the ball. The Heat started the second quarter particularly sloppy, but to a degree the unpolished passes are expected with this abbreviated training camp.

All in all, this game was an outstanding performance for the Heat and a sobering one for Dallas. Miami will play the home opener Tuesday against the Boston Celtics at 8 p.m. on TNT.