Rapper J. Cole, a protégé of Jay-Z, titled his debut album Cole World – The Sideline Story. On the song "Sideline Story" the 26-year-old hip hop artist laments over a coach keeping him on the bench. "I put my heart and soul in this game / I’m feeling drained / Unappreciated, unalleviated," he says. 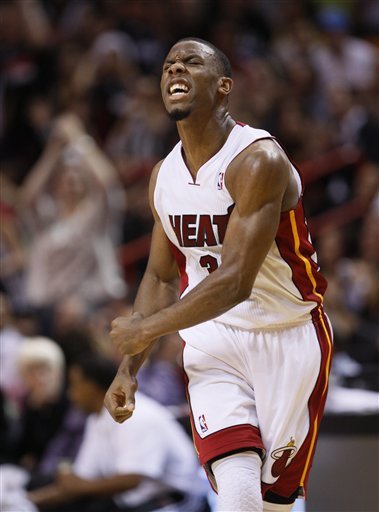 This game represents a valuable win for this team. Throughout the first year of the Big Three era, critics lambasted the Heat’s ability to score in half-court situations late in games. Boston employed a zone defense – a type of defense that Dallas went to at times in the Finals – and Miami was able to manufacture good, open shot attempts.

Cole made an open mid-range jumper to put Miami up 108-98 with three minutes left to go. After former Heat player Keyon Dooling scored seven unanswered points, Cole splashed home another jumper to give Miami a 110-105 edge. And after Brandon Bass made a jumper to cut the Heat lead to three points, the 28th pick in the 2011 NBA Draft made another jump-shot. When he went to the free-throw line with nine seconds left to ice the win, the crowd showered him with "MVP" chants.

Some may criticize Miami’s fourth-quarter offense, which gave key shot attempts to Cole and Udonis Haslem. Coaches use the zone to cut off driving lanes, so Dwyane Wade and LeBron James could not go to their usual strengths. Erik Spoelstra should have used Chris Bosh as an option in the free-throw line area to attack the zone, though. Miami also went with a lineup of Cole, Wade, James, Haslem and Bosh down the stretch, none of whom are particularly good 3-point shooters. Haslem did grab 12 rebounds off the bench, but he shot 1-for-9 on the night. Putting James Jones for Haslem just for an offensive possession after a timeout would have put a player who can attack the zone on the floor. Haslem had some nice looks late in the game, but just missed the shots.

The last quarter consisted almost entirely of half-court basketball, but Wade and James picked up right where they left off in the first half in the home opener. Miami scored 69 points in the first half, exploiting their athleticism edge. James even tipped in a missed alley-oop layup from Wade seconds after throwing up the lob. In the third quarter, Wade connected to James on an alley-oop dunk in transition. That bucket gave Miami an 18-point lead, which crested at 20 shortly thereafter. Wade finished with 24 points on 8-of-15 shooting from the field and 8-of-10 shooting from the line, eight assists and four blocks. The 2006 NBA Finals MVP sent back two point-blank shot attempts, one from Ray Allen and the other from Dooling. James, meanwhile, had 26 points on 9-of-14 shooting from the field, 8-of-9 shooting from the foul line, six rebounds and five steals.

Chris Bosh rebounded nicely from his dismal performance in Dallas, finishing with 18 points on 8-of-11 shooting and 11 rebounds. He even made a 3 in transition in the first quarter, a weapon Spoelstra wanted to use this season. The only blemish was Bosh’s 1-for-4 free throw shooting.

Continuing with the negatives, Mario Chalmers seemed to gift the starting role to Cole before the rookie went on the tear in the fourth quarter. He turned the ball over four times in the first two minutes of the second half. One particularly maddening mishap came when Chalmers had Wade ahead of him on a fast break. Instead of throwing him a bounce pass, Chalmers tried to get fancy and throw an alley-oop lob to him.

Shane Battier received 17 minutes off the bench, making a 3 early in the fourth quarter and guarding Allen in spurts to keep Wade rested. Spoelstra put James Jones on Allen in the first half, and the 6-foot-8 forward from Miami was simply too slow to keep up with Allen. Jones did make three first-half 3-pointers, though. The combination of Battier and Jones allowed Spoelstra to play Wade and James 36 minutes each, which is useful in this schedule consisting of 66 games in 124 days.

The Heat kept Kevin Garnett to a mostly quiet night, but Allen received some open looks and made Miami pay for them with six made 3s. Rajon Rondo had an efficient game – 22 points, 12 assists and eight rebounds – and the Heat’s defensive rotations overall looked a step slower than they were in Dallas.

Miami will try to improve to 3-0 on the season when the team plays the Charlotte Bobcats Wednesday at 7 p.m.