If there was ever going to be a night that Dwyane Wade let the Heat down, it would've been Wednesday night. We should know better than to doubt him by now.

Wade struggled through a 5-for-13, 10-point performance but hit the game-winning bank shot over Gerald Henderson with 2.9 seconds remaining to give the Heat a 96-95 victory over the Charlotte Bobcats. Wade sat out most of the third quarter with a left foot contusion and lacked the explosion that has come to define his game. He picked a good time to return to his normal self. 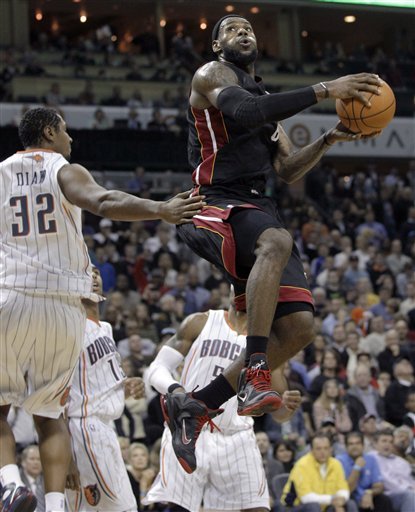 The play of the game, however, may have been a sequence that gave the Heat an 88-86 lead with 2:30 remaining. Chris Bosh blocked an attempted Corey Maggette dunk into the corner and LeBron James saved the ball from going out of bounds, launching a full-court pass to Wade for an easy dunk. James followed that up with a reverse jam to give the Heat a 90-86 lead. Two Udonis Haslem free throws gave the Heat a 92-88 lead with 1:05 remaining. A Henderson layup cut the Heat's lead to 94-92 with 31 seconds remaining, and Wade turned the ball over on the ensuing possession. Henderson's 3-pointer with 12.2 seconds left gave the Bobcats a 95-94 lead. An apparent defensive mix-up occurred as Shane Battier stayed with a cutting Maggette, whom Wade was in position to pick up, leaving Henderson alone in the corner.

Wade's heroics wouldn't have been possible without the brilliance of James and Bosh. James carried the Heat offensively, scoring 35 points on 13 for 23 shooting and hitting all nine of his free throws. He added six rebounds and seven assists. Bosh chipped in 25 points and 6 rebounds, including a couple highlight dunks and the game-changing block of Maggette.

Bosh gave the Heat their first lead of the night at 80-79 on a 2-handed dunk off a fast-break bounce pass from Wade. A violent dunk by Bosh over D.J. White gave the Heat an 86-84 lead with 3:35 to play. The Heat were cheated out of two points prior to that on what should've been a James dunk. James threw the ball through the basket so hard that it hit a jumping Henderson's head and popped back up through the hoop. None of the game's officials noticed that the ball cleared the net, and thus should've counted.

Miami looked sluggish early, allowing Charlotte to jump out to an 11-0 lead three minutes into the game and a 32-20 lead after the first quarter. The Bobcats surged to a 60-45 halftime lead on 16 first-half points from D.J. Augustin and 14 from Boris Diaw. Charlotte out-rebounded the Heat outrebounded 53-30 during the game.

Miami picked up its defensive intensity in the third, outscoring the Bobcats 24-10 and cutting the 15-point halftime deficit to one entering the final quarter. The Heat held the Bobcats to 35 points on 36 percent shooting in the second half after allowing Charlotte to score 60 in the first half.

Miami travels to Minneapolis to take on the Timberwolves Friday night at 8. The game will air on SunSports.

Prior to the game ESPN's Marc Stein tweeted and Sports Illustrated's Chris Mannix confirmed the Heat's interest in free agent center Joel Przybilla. The 7-foot-1 center has averaged 1.5 blocks/game during his 11-year career. Should the Heat sign Przybilla, the team would likely release either Eddy Curry or Mickell Gladness.