Share All sharing options for: James, Wade Connect to Give Heat 103-101 Win

The Miami Heat would've preferred to win these last two road games more convincingly than they did, but it's hard to argue with their end-of-game execution. For the second game in a row, Dwyane Wade hit the winning basket, this time with a little help from birthday boy LeBron James. With the game tied at 101 with six seconds remaining, head coach Erik Spoelstra drew up a designed play that had Wade start underneath the basket and run towards the top of the key off staggered screens set by Shane Battier and Chris Bosh. When Wade turned back and darted towards the hoop, the inbounding James threw a perfect lob which Wade deftly banked in to give the Heat a 103-101 lead with 4.6 seconds remaining. That score would hold as Wayne Ellington's 20-foot jumper misfired at the buzzer, giving the Heat their second 4-0 start in franchise history. 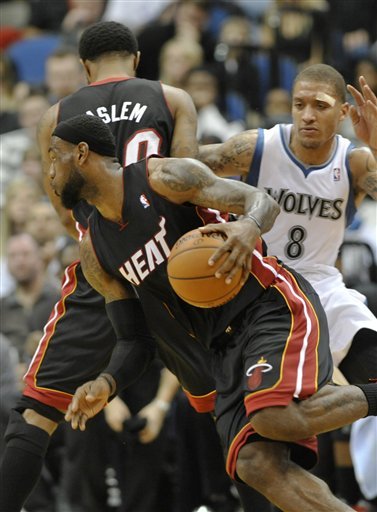 While Wade hit his second consecutive game-winner, it was James who once again carried Miami for most of the night. The now 27-year-old James celebrated his birthday in style, hitting 16 of his 26 shots while tallying 34 points, eight rebounds and 10 assists. Wade continued to show the effects of his bruised left foot, shooting just 8 for 19 for 19 points and committing five turnovers. Once again, however, he was there when the Heat needed him most.

It seemed early on as though the Heat would cruise to a much more comfortable win than Wednesday night's in Charlotte. The Heat came out much stronger than they did against the Bobcats, building a 31-20 lead on the strength of James' 15 first quarter points. Minnesota answered with an impressive second quarter, outscoring the Heat 33-20 en route to a 53-51 Wolves halftime lead. Miami took an 82-75 lead into the final quarter, but an 11-0 Wolves' run -- spearheaded by rookie point guard Ricky Rubio -- gave Minnesota an 88-83 lead with 7:31 remaining. Rubio was outstanding, contributing 12 points, 6 rebounds and 12 assists off the bench.

Bosh kept Miami in the game while the offense otherwise sputtered, scoring the Heat's first 6 points in the fourth quarter including a baseline fadeaway to tie the game at 88 with 5:49 remaining. He finished with 20 points on 9 for 17 shooting, 9 rebounds and 4 assists. He consistently hit the 16-18 foot jumper that the Heat rely on him for.

Rubio's three with 2:30 left gave Minnesota a 98-94 lead. Wade cut the deficit to two with a jumper from the top of the key with 2 minutes left. James tied the game at 99 with 1:08 remaining when Anthony Tolliver was called for a blocking foul and James hit a continuation finger-roll. Wade's difficult jumper with a foot on the line put Miami up 101-100 with 33.7 seconds left. James rebounded a Wayne Ellington miss with 16 seconds left but turned the ball over on a long pass intended for Udonis Haslem. Tolliver was subsequently fouled and hit 1 of 2, tieing the game at 101 and setting up the game's decisive play.

The Heat will begin a 3-game homestand Sunday night in a rematch with Charlotte. The game tips off at 6 o'clock and will air on SunSports.