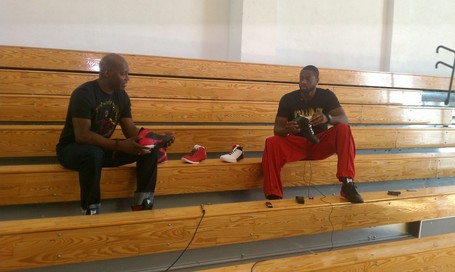 Today in downtown Miami Dwyane Wade and Nike formally released their new Jordan Brand shoe, the Fly Wade 2. It was really cool to hear from Dwyane as he and Andre Doxey, creative director of the Jordan Brand (shown in photo above), told us about everything that goes into creating, designing and manufacturing a new shoe.

D-Wade said that when designing the shoe, he often would think about his love for cars and model the shoe around that. He mentioned Aston Martin's a few times, saying he wanted the Fly Wade 2's to be sleek and stylish. You can see them in 4 different colorways in photos I've posted below from today's event.

On LeBron James- "I said, 'Let me look like the mean one. You play the way you play.' We did talk about that. We were on vacation we talked about that. We didn't run away from losing the Finals. We looked at it and said, 'Why did we lose? How did we lose? What can we do different? How can we be better as leaders?' And the one thing I kind of wanted for LeBron is to get back to being LeBron, and not trying to be somebody that everybody wanted him to be, in a sense. He seems to understand that, as well."

On the Heat's roster and possibility of signing free agents- "I understand pretty much what we got is what we going with. If we get anything else, it's a bonus. Obviously, it's no secret that we don't have as much money as everybody else. There's some guys out there that we're looking at, that's a possibility that would fit with us."

On the status of Mario Chalmers- "I haven't gotten involved in it with 'Rio. I mean I worked out with 'Rio a few times this summer, talked to him, actually I talked to him yesterday. Obviously, as a team, we would love to have 'Rio back, but also you want 'Rio to do what's best for him. So you kind of try to stay out of it but you also let him know, 'Listen, you're a Heat and until you put on another jersey you're a Miami Heat and we want you here.' " The Heat made a qualifying offer of 1 year, $1.1 million to Chalmers, who doesn't seem too happy about the low offer. Keep in mind though, Miami's roster is full of players who could have made a lot more money by signing with other teams.

On Chris Bosh's performance in the playoffs last season- "I think he was the most consistent out of all of us, if you want to say, from each round. I mean, I had a terrible Chicago series and LeBron didn't have a so-hot Dallas series. Chris was kind of stable through every round, played real well."

Following the Q&A, we were able to try out the shoes on the court. There was even a trampoline and padding down at one basket for us to try and dunk with. I'll say this about dunking with a trampoline...its not nearly as easy as it looks. I made a couple very poor attempts, barely getting off the ground. After that I stuck to taking jumpers, though I did run around a bit, and I must say that the shoes are great for playing ball. They have improved greatly on the original Fly Wade, and I highly recommend them to anyone who either plays basketball or just wants to look great in a comfortable shoe that was designed by the Miami Heat's Dwyane Wade. Below you can find four different colorways of the new FLy Wade 2, including the ones he'll likely wear on Christmas Day (or Opening Day, whichever your prefer). 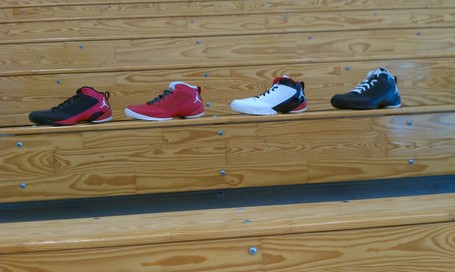 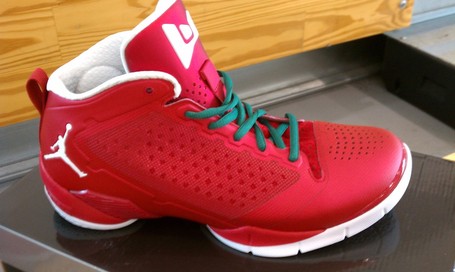 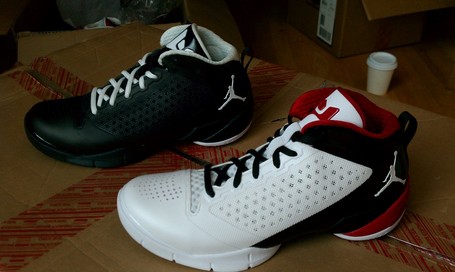