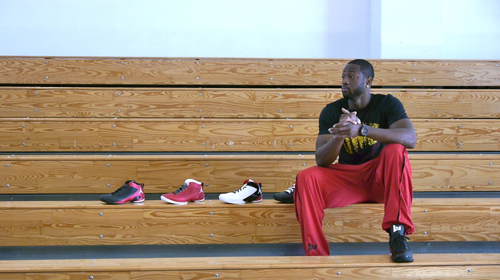 Dwyane Wade knows the reality of how the Miami Heat's roster has been constructed and how it's directly tied to how limited their options will be once free agents are free to sign with teams of their choice within days.

Because of that, Wade has let the Heat front office do all the recruiting this time around.

"I haven't really done any because I understand pretty much what we got is what we're going with," Wade told Hot Hot Hoops during the official launch of his signature Jordan Fly Wade 2 model at the Jose Marti Gym near downtown Miami. "If we get anything else it's a bonus for us. Obviously, it's no secret that we don't have as much money as everybody else. Now, you know, there's some guys out there that we're looking at and it's a possibility that they will fit with us but I haven't done a lot as I did in the past."

After presenting his new shoe to the large media crowd assembled at the basketball court of the gym, Wade took time afterwards to speak to the local contingency of Heat beat writers about a range of topics. Most of the discussion revolved around his teammates, with Wade at one point being told of Bosh's desire to be more aggressive in his second season in Miami.

"Obviously, as you have more time with people you get a little bit more comfortable with them. Me and Chris spent time together this summer so I think Chris is already more comfortable, he see things a little differently.

"He's going to be a different player, he's going to be more vocal," Wade continued. "He's going to talk to us more and let us know how we can help him out too. I think we all will see a different side of him in that aspect. It's not when it comes to bullying guys in the post, that's not Chris. (laughs) But in the games, I think you'll see him get a little bit more vocal, more comfortable and confident in his game."

Wade had only praise for Bosh's performance in last season's playoffs, his first extended appearance of the postseason.

"I thought he did great. Chris played very consistent each round, I thought he got better. He hushed a lot of critics that was talking about him. I think he was the most consistent out of all of us, if you want to say, from each round. I mean, I had a terrible Chicago series and LeBron didn't have a so-hot Dallas series. Chris was kind of stable through every round and played real well. So I think he's going to play even better this year."

Wade also touched on his interactions with Mario Chalmers during the offseason, with the restricted free agent one of the few question marks of the Heat's core roster entering the new season. Despite this, Wade thought it would be best to avoid nagging his backcourt partner too much about his contract status.

"I haven't gotten involved in it with 'Rio. I mean I worked out with 'Rio a few times this summer, talked to him, actually I talked to him yesterday. Obviously, as a team, we would love to have 'Rio back, but also you want 'Rio to do what's best for him.

"So you kind of try to stay out of it but you also let him know, 'Listen, you're a Heat and until you put on another jersey you're a Miami Heat and we want you here.' We talked about the season a little bit but I stayed away from trying to say, 'Listen, you need to sign back.'"

The superstar guard also shed more light on his deep friendship with LeBron James and their conversations during the summer in preparation for the new season apparently had a profound effect on Wade's good friend.

"You can tell, some of the conversation that we talked about this summer between me and him kind of resonated and he looked at that and he's grown. He's grown from last year, he's growing every day. I could see that when he talked yesterday (on ESPN) so he's listening."

Much like Bosh expressed a desire to get back to his roots - so to speak, LeBron also vowed to change his game this season and return to his old style of playing within himself and learning to have fun again out on the court. Wade was on board with getting his friend back on track and focused on the task at hand.

"I said, 'Let me look like the mean one. You play the way you play.' We were on vacation and we talked about that. We didn't run away from losing the Finals. We looked at it and said, 'Why did we lose? How did we lose? What can we do different? How can we be better as leaders?'

"And the one thing I kind of wanted for LeBron is to get back to being LeBron, and not trying to be somebody that everybody wanted him to be, in a sense. He seems to understand that, as well."