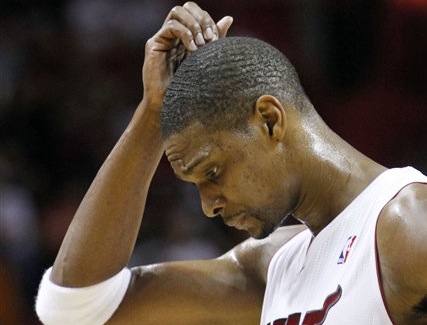 The last time we were talking about the Miami Heat playing against the Los Angeles Lakers there was a much different feeling that surrounded the game.  All the talk was about a possible NBA Finals preview and whether or not the newly formed Heat could keep up with the back-to-back champs.  Needless to say, the 24-hour period leading up to the two games couldn't be more different.

The Lakers are rolling right now, winners of 8 straight games and quickly closing in on 2nd place in the Western Conference.  Its not surprising that the veteran team is picking the right time of year to get hot, but we'll see if they keep it going all the way to the playoffs.  I wouldn't doubt it because just like Boston, this team has been together a while and during that time, winning has been a constant.

One reason that L.A. is doing so well is the defensive surge that has come from their center, Andrew Bynum.  The young Lakers center has been blocking shots left and right.  He has at least one in every game of their winning streak, and hasn't had a game without a block since January 28th, a stretch of 17 games.  Over the last couple weeks he has had games with 5 and 6 blocked shots, and in those games he committed a total of 1 foul.

He has been rebounding like a beast lately, grabbing double figure boards in 6 of his last 8 games, but lately he has taken it to a whole nother level.  In his last three games Bynum has picked up 16, 17 and 17 rebounds, the best 3-consecutive game total in his career.  On the season he is averaging 8.4 boards per game but in his last 8 games is racking up 12.1 rebounds.

Tipoff from the AAA will be a little early tonight, as things will get started at 7pm thanks to this being Game 1 of TNT's nationally televised doubleheader.  If you want to go to the game but don't have tickets, don't forget about Peninsula Is Mightier's partnership with TiqIQ that not only helps you get tickets right here on PIM but they also search through several ticket selling websites and finds you the best deals out there.  Click here to see what's available.