Share All sharing options for: Miami Heat to honor Tim James on March 19 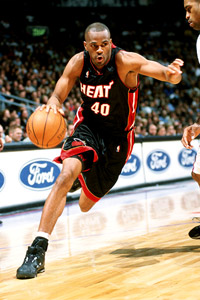 MIAMI, FL – The Miami HEAT announced today that they will honor former first-round draft choice Tim James on March 19 prior to their game against the Denver Nuggets as part of their long-standing Home Strong program. "It’s a great pleasure for us to have Tim James back in his house on this night," said HEAT President Pat Riley. "He has done something absolutely admirable, above and beyond like so many other courageous American citizens, and we are very proud of him. It will be a special night as we honor one of our own as part of our Home Strong program." James, the HEAT’s first-round draft pick in the 1999 NBA Draft (25th overall), played three seasons in the NBA with the HEAT (1999-00), Charlotte Hornets (2000-01) and Philadelphia 76ers (2001-02). He also played five seasons overseas in Japan, Turkey and Israel. Currently stationed at Fort Hood (TX), James enlisted in the Army on Sept. 12, 2008 and after basic training was deployed to Iraq on July 27, 2009 where he served for 12 months before returning to the United States in July 2010. He was promoted to his current rank of Corporal on Oct. 31, 2009. Prior to being selected by the HEAT, James starred locally at the University of Miami where he is one of only two men’s basketball players to have his jersey retired. The Hurricanes retired James’ number 40 jersey on Feb. 27, 1999 before his final collegiate regular season game. He was inducted into UM’s Athletic Hall of Fame in 2009. Established in 2006, Home Strong is an ongoing program that salutes and honors the courageous men and women in uniform for their dedication to the United States Armed Forces. Pat Riley and the Miami HEAT created this initiative as a means of demonstrating support and paying tribute to our soldiers and veterans. The HEAT honor military personnel prior to every pre-season, regular season and postseason contest.