Share All sharing options for: Heat Lock Up Two Seed 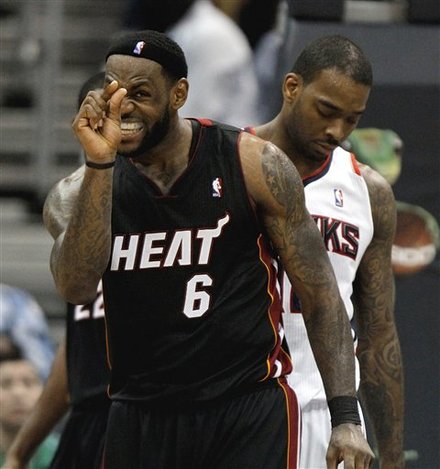 The Miami Heat stood on the verge of blowing a 20-point lead when the Atlanta Hawks’ second unit surged back to make the game interesting. But Miami won the game; this win, coupled with the Boston Celtics’ loss to the Washington Wizards tonight, locks up the second seed in the Eastern Conference for the Heat. The Philadelphia 76ers’ loss to the Orlando Magic sets up a Heat vs. Sixers first-round playoff series.

After Zaza Pachulia made a shot over Zydrunas Ilgauskas, the 7-foot-3 veteran center threw the ball at Pachulia, earning an ejection. Jamal Crawford’s technical free throw tied the game at 88 with three minutes and 28 seconds left.

After coming up empty on various possessions against the Hawks’ zone defense, the Heat finally attacked the zone on their ensuing possession. LeBron James drove into the lane before kicking the ball out to James Jones, who nailed a 3-pointer and earned a trip to the foul line, completing the four-point play.

Dwyane Wade came up with two blocks on Atlanta’s next possession before finding Jones for another 3-pointer. Miami held on for a 98-90 victory. The Hawks had no business getting back in the game, but a win is a win.

The terrific play from the supporting cast dropped off considerably from the Heat’s win over the Boston Celtics Sunday, with the Big Three combining to score 70 points. James, who scored 43 points against the Hawks March 18, dropped 34 points on 10-of-21 shooting from the floor and 12-of-14 shooting from the free-throw line. He made numerous jumpers in the second quarter and even had a nice alley-oop from a Mario Chalmers lob. James also had 10 boards and seven assists, but did settle for a few jumpers in the fourth quarter, allowing the Hawks to get out in transition.

Wade had 17 of his 21 points in the first half, executing several highlight-worthy plays at the rim in the second quarter. He had a nice dunk off a James steal midway through the period that would not have occurred without Chalmers diving for a loose ball, dunked the ball over Kirk Hinrich with a minute left in the half and made a sweet reverse layup to close the second quarter, never losing his stride as he jogged into the tunnel. Wade also had five rebounds, six assists and three blocks.

Despite struggling with late foul trouble – he picked up his fifth personal foul just seconds into the fourth quarter – Chris Bosh shot 7-for-10 from the field for 15 points and nine boards. Bosh also had a huge defensive play late in the game when he took a charge with a minute left in the game. Playing with five fouls, Bosh positioned himself out of the restricted area and stepped up.

Not much was offered in support aside from Jones’ 3-point shooting, although Mike Bibby had a very solid game against his former team. Bibby made one 3-pointer, but also showcased his driving game on numerous possessions, proving that he can still finish at the rim. Joel Anthony grabbed eight boards, but Erik Spoelstra went with a small lineup with Bosh at the five to close the game.

Mario Chalmers played well too, making a 3 and dishing out five assists. Mike Miller missed both of his attempts from the field in just more than 12 minutes of action. The Heat’s fourth highest-paid player appeared to roll his ankle in this game, adding another injury to the list. It seems as if Miller has racked up more injuries than 3-pointers this year.

One huge negative was the turnovers. Miami committed 19 mishaps in the game, and even had two consecutive 24-second violations in the fourth period. Before the playoffs, the Heat should work on making crisper passes and attacking the zone defense.

The Heat will end the season with a visit to Toronto Wednesday to face the Raptors. Can we see Dexter Pittman get the start?