Share All sharing options for: Heat End Season With Win

Who does Erik Spoelstra turn to when he rests LeBron James, Dwyane Wade, Chris Bosh, Mike Miller and Erick Dampier for the final game of the regular season? Just sit back and let these statistics marinate for a second: Eddie House scored a career-high 35 points, Jamaal Magloire grabbed 19 rebounds and Mario Chalmers dished out 13 assists. 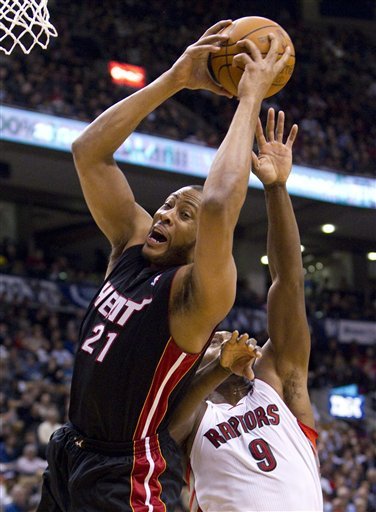 The final result was a 97-79 Miami Heat victory over the Toronto Raptors to finish the regular season with 58 wins, Miami’s best 82-game stretch since the 2004-05 season. This win also guarantees the Heat home-court advantage over every team except the San Antonio Spurs and Chicago Bulls. Had Miami lost this game, the Dallas Mavericks would have home-court advantage in a possible NBA Finals rematch from 2006.

Although the score looks great, this game was especially hard to watch. The Heat went to a zone defense in the fourth quarter, and the Raptors only managed to score 10 points in the final period of their season. Leandro Barbosa, Reggie Evans, Amir Johnson, Sonny Weems, Andrea Bargnani and Jose Calderon did not play for Toronto, so this game featured some particularly frustrating offensive sequences.

Not all was bad, however. House scored 18 points in the first quarter alone, shooting 8-of-9 to open the game. He finished 14-of-27 from the field overall, making seven 3s. Spoelstra gave him the green light to shoot, and he never stopped shooting, even when he missed a few consecutive shots. Sometimes I wish that Miller had a bit of House in him; the 6-foot-8 swingman should never lose confidence in himself.

Two veterans turned back the clock offensively in this game: Juwan Howard and Zydrunas Ilgauskas. Howard shot 7-of-12 from the field for 18 points and six boards. He showcased some nice moves posting up, but keep in mind that he went up against the Raptors. Ilgauskas proved that he is more than just a pick-and-pop player, backing down his man a few times before shooting fall-away jumpers. The 7-foot-3 Lithuanian finished with nine points.

Heat rookie Dexter Pittman played for just the second time this season, logging nine minutes of action. He scored his first and only field goal of his first year in the NBA on a layup after a pick-and-roll and grabbed one rebound. To my surprise, he never received the ball down low on the block to post his defender up. Pittman spent most of his time setting screens for perimeter players, and that may be at the top of his job description if he does receive significant minutes in the next couple years. Due to the thin rotation, Spoelstra played Pittman and Magloire at the same time for stretches (which means that Magloire grabbed all the rebounds).

James Jones also made four 3-pointers, and he may need that confidence going into the playoffs. House and Magloire played great, but they might not even step onto the court in the postseason unless it is only for mop-up duty.

The Heat will open the first-round playoff series against the Philadelphia 76ers Saturday at 3:30 p.m. on ABC.