Game Notes after the jump...

If you want to go to the game but don't have tickets, don't forget about Peninsula Is Mightier's partnership with TiqIQ that not only helps you get tickets right here on PIM but they also search through several ticket selling websites and finds you the best deals out there. Click here to see what's available.

The guys at TiqIq also put together a graphic that shows the way tickets are selling for the playoffs around the league. I can't believe how much the Knicks tickets are going for...those are some fans that really appreciate post-season basketball. Also, its interesting how the Mavericks and Spurs are at the bottom of the list. As good as those teams are year in and year out they still manage to keep their ticket prices as low as possible. That is quite impressive. 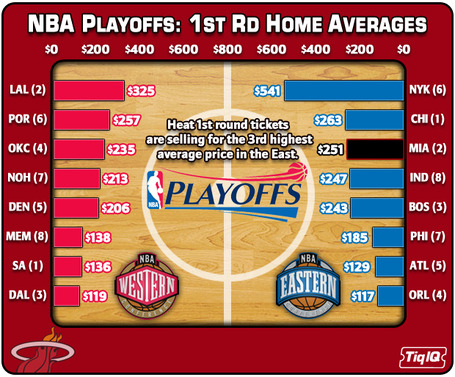