A top 10 defensive team, constructed with the athletic prowess and speed to overwhelm opponents over the course of 48 minutes. Sound like a broad description of the Miami Heat, or the Philadelphia 76ers? Both.

Save for the Bulls drawing a matchup against the Pacers, Miami has landed the most favorable opponent in the 76ers: a young team (5 of their top 8 players are 23 or younger) who over-achieved at the helm of well-revered coach Doug Collins (responsible for increasing his team’s wins every first year: 87’ Bulls: +10 wins, 96’ Pistons: +18, 02’ Wizards: +18, 11’ Sixers: +14), who lack any overwhelming size or a Top 40 scorer. 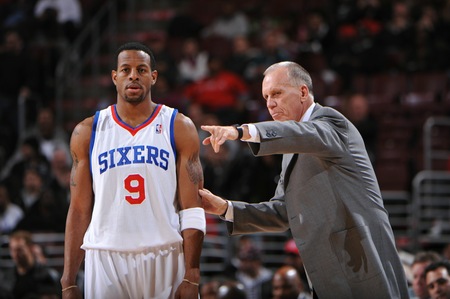 (Must read article on Doug Collins).

With Iguodala and Lou Williams hobbling into the series, the Sixers will have a steep uphill battle to score points against a heightened Miami defense as well as stopping the relentless drives from Wade and James, the duo combining to average 53.3 PPG in their 3 regular-season meetings. Under coach Collins, the Sixers are elementally sound enough to steal a game in the series but just don’t have the talent and means to overcome the white-hot Heat’s firepower.

Prediction: Miami wins the series in 5.

I’ve refused to enter the debate for MVP until it is thoroughly defined and outlined in written form by the league, or even by a fabricated entity solely dedicated to clear all dubious matters revolving in the NBA. As of today, it means everything, anything and sometimes nothing at all.

Miami adulation would point me towards proclaiming LeBron James the league’s MVP, but unfortunately that seems inappropriate when Dwyane Wade is on the same team. It’s not that I don’t believe in his merit for the title, but as much as LeBron James continues to barbarically dominate the sport, Dwyane Wade continues to undeniably be the best two-guard in the league, only slightly shadowed by the camera magnetism James draws.


History has seen co-rookies of the year, out of the impossibility to claim one player more important than another.  James and Wade re-defined the free agency spectrum and sparked the sway in the power pendulum to favor the players and not the owners.  They’ve pioneered a new movement in basketball. Why not inspire the introduction of better defined and/or defined awards, or become the first teammates to be named Most Valuable Player(s)?

To put it in perspective, picture a team with the more formal combination of Chris Paul and Dwight Howard, full of unstoppable pick-and-oops, finishing with a league-leading 70 games in a season.  It'd be hard not to assume one of these two players should be the recipient of the MVP award, but which one?  Can one in good conscience pick one over the other when both have an equal share of their team’s success?  Didn’t think so.

The Decision and the boisterous introduction of the Big Three at the AAA left a sour taste in the mouths of the people this season, but time heals all wounds.  Wade and James will have their chance in the coming years, once everyone releases their grip on the public appeal of the players and focus on the sport of basketball.

Anyway, since co-MVPs are out of the question, I’ll pretend you are holding a gun to my head and pick Dwight Howard.  In a league tailored for agile guards and scoring, Howard has somehow become underrated right under our noses.  His two best wing defenders from last season, Pietrus and Barnes, are long gone.  Hedo boomeranged back to Orlando as a former, more expensive shell of himself.  His bodily backup, Gortat, has been replaced with a small ball line-up adapting to the evolving NBA, and Vince Carter was replaced by a Gone-Too-Soon Gilbert “Cap Killer” Arenas and Might-Be-Gone-Soon Jason Richardson, a wash for the most part now, but a deadly prophecy for 2012.

Still, he single-handedly managed to keep his team of modest mice afloat with his defensive tenacity, increasing his PER, rebounds per game, and steals per game while also netting a career-high usage of 27% and 14.4 WS (Win Shares) - 2nd in the league only to Kevin Love of the Timberwolves (worst record in the league).

Defensive Player of the Year: Dwight Howard – Can’t foresee Dwight not going for a 3, 4, 5, etc-peat.  Dikembe Mutombo and Ben Wallace are the NBA's historical leaders with 4 DPOY awards each, likely to be passed by Dwight in the coming years.

Sixth Man of the Year: Lamar Odom –Yes he averages more minutes than Devin Harris, Carlos Boozer, Marc Gasol and Emeka Okafor but do you not see him sitting on the bench when the game starts? (Just another award with dubious implications). The title once held by our own Mike Miller (06’ Grizzlies) must finally fall to Lamar’s lap this year.  It’s due time.

Most Improved Player: LaMarcus Aldridge – Made THE jump from solid player to near All-Star, taking on the weight of the team on his shoulders in Brandon Roy’s ailing absence.  He’s become an inside-outside threat, increased nearly every statistical measurement and is now considered one of the top forwards in the league.  We went from a “someone should probably pay attention to that kid, LMA” last season to “FOR THE LOVE OF GOD CAN SOMEONE PLEASE HELP ON HIM??!!!!”

Rookie of the Year: Blake Griffin – Is it fair that he’s technically in his 2nd year in the league after a whole year of learning, development, growth, etc? Probably not.  But then again, the inhumane things he did to his opponents, rookies and vets alike, wasn’t fair either.

Coach of the Year: Tom Thibodeau – Thibs urned a roster not oft found in defensive scouting reports into the best defensive team in the league with the best record, a feat so impressive a Phil Jackson- Pat Riley coach baby would not be able to replicate.

The Spurs’ Popovich was a close 2nd, admirably composing a new roster combination of the elderly and youth to flip the script from the defensive brigade teams in previous years to an elite offensive team.  Shame Pop will be filed under another case of the Spurs “But they’re ALWAYS that good.  Booooring.”

Executive of the Year: Pat Riley – Won it before the season even started.