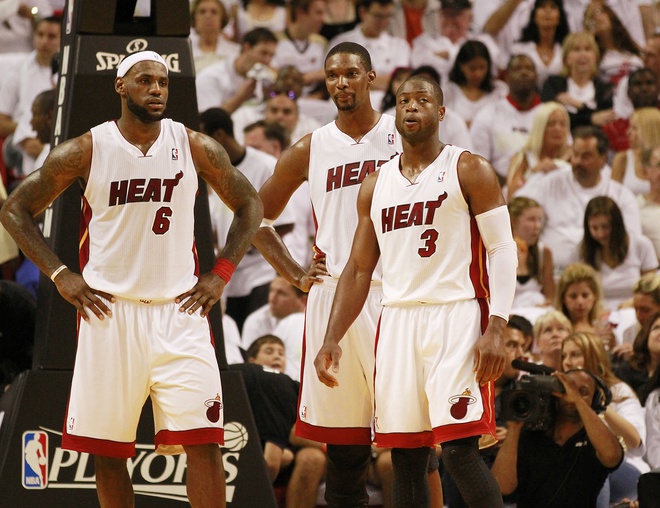 The playoffs have finally started but it's a familiar script for the Miami Heat as they needed big production from each member of their All-Star trio to win their opening game in the postseason 97-89 against the Philadelphia Sixers who proved they won't go down without a fight.

But this time each player had slightly different roles through the course of the game. Dwyane Wade and LeBron James struggled offensively early with just 5 combined points in the first half as the Sixers raced out to an early double-digit lead. But it was more than offensive woes that plagued the Heat, their pesky opponent had a solid game plan on both ends of the floor that was devised by Coach of the Year candidate Doug Collins.

"To start, they came out very aggressive," said Wade. "They made a lot of shots and they were reading our defense very well. You could tell that they scouted us very good on our defensive rotations and (they) got a lot of shots that they wanted. We had some shots, we just didn't make them early on so they got out to a big lead."

The Sixers started hot from the field, connecting on 60% shooting in the first quarter, and quickly quieted the crowd at American Airlines Arena moments after the opening tipoff.

"We were really happy with the way we played that first quarter," Sixers forward Elton Brand said. "We moved the ball, we hit our shots and we defended them well. It was encouraging that none of the Big 3 shot over 50 percent."

Chris Bosh kept the Heat from falling too far behind as hit a variety of shots from close range, mid range and also at the free throw line while chipping in 12 rebounds. The supporting players had their moments here and there for the team but it's abundantly clear that this team's success starts and ends with their stars no matter the opponent.

Crucially, the use of zone slowed the Sixers down significantly while the Heat's rebounding edge grew larger and larger as they kept cleaning the glass with the visiting team suddenly cold from the outside. Brand also offered up another reason for his team losing control of the game after their surprising hot start.

"We just let them get to the free throw line entirely too much throughout the game, especially that second quarter."

Minutes earlier, Sixers coach Doug Collins refused to discuss the free throw shooting disparity in which the Heat attempted 39 free throws compared to just 12 for the Sixers, joking that he didn't want his grandkids to lose out on their college funds.

The Heat switch to zone also bothered the Sixers in the second quarter after scoring 31 points in the opening 12 minutes. James wasn't happy with his team's start to the playoffs.

"That wasn't Miami Heat basketball, especially defensively," he said. "(We) came out with the zone against a team that really likes to attack. The zone kind of keeps everyone out in the perimeter. That just caught them off-guard so the possessions that we went to the zone allowed us to get back into the game. CB was very aggressive at the time and we made a great run."

In light of the MVP chants the home crowd gave him with every trip to the foul line, James then surprisingly told the media after the game he considered Chis Bosh to be the most important player on the team. Yet Bosh was one of the few players logging heavy minutes to not hear MVP chants himself since the crowd also chanted the same thing to Wade and jokingly for Joel Anthony as well, who's drive and energy have made him a fan favorite despite his limited offensive game.

With a little over 90 seconds left to the game and the Sixers within three points of the Heat at 87-90 after scoring 12 straight unanswered points, Wade's driving layup gave his team some much-needed breathing room and proceeded to revive a stagnant offense that could not score while he sat on the bench with 5 fouls. Despite most fans and the media writing off the young Sixers, they certainly proved they belonged in the postseason despite the sense they overachieved in the regular season after a very poor start. James wasn't complaining after the hard-fought victory.

"At the end of the day that's what we want, we want a challenge. Those guys like to challenge us so we're not looking to come into this series and play 36 or 24 minutes and win a game. It's about 48 minutes and we got to be in tune with the game plan until that final horn sounds."

Check back here at Hot Hot Hoops on Sunday for more coverage of Game 1 with exclusive content...