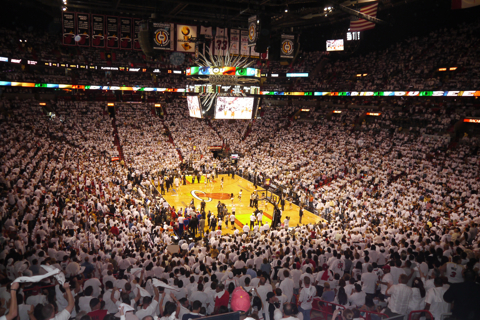 If only it was this easy every night.


The Sixers never led in this game and seemed to be completely outmatched against the Heat and have done very little after a blistering hot start to the series in the first quarter of Saturday's game. Since the opening 31-point outburst, Philadelphia has failed to score more than 21 points in the following 7 quarters as the Heat have comfortably held the Sixers at bay even without dominant offensive performances by the star trio of Dwyane Wade, LeBron James and Chris Bosh.


Just 29 collective points from their starters will kill just about any NBA team's chances of winning against any opponent, especially against an elite team like the Heat. Heck, LeBron scored 29 points on his own after hitting just 4 field goals in their first matchup (all of them in the second quarter and by the rim).

"They play great defense, let's give it to them," said Sixers coach Doug Collins. "They're a terrific defensive team."

The Heat have now won 17 of their last 20 games and 9 straight win against the Sixers. With a miserable 34% field goal shooting as a team, the Sixers have never been comfortable on offense since Joel Anthony has made his undeniable, MVP-worthy mark on this series. Even more encouraging has to be that his energy on the defensive side has been contagious with even Bosh making strides on that side of the floor.

"Joel Anthony is outstanding," Heat coach Erik Spoelstra declared afterwards. "His versatility on several different players and also defending the rim and helping guys out, he's showing why we value him so much for the things he does defensively."

Mike Miller only played 3 minutes again, just like he did in the first game. At this point, Heat fans might as well expect Udonis Haslem to contribute more during this postseason than his former Gator teammate who is literally crumbling under the weight of his piling injuries. For now it hasn't been a concern because James Jones is finally looking like the player who was playing at a high level and having a consistent role with this team.

Andre Iguodala notched 7 rebounds and 7 assists but had just 2 field goals in both games of the series. If the former Dream Team player who looked so good last summer for his country can't step up to be their leader and go-to guy then who will (or can)? He was practically Team USA's prime defensive stopper but he isn't locking down anyone on the Heat and has had little help from his teammates who have looked bewildered trying to keep up with the Heat's attackers.

The saying goes "Win Or Go Home". Well, the Philadelphia Sixers are certainly going back home right now for the next two games in the series but they better hope to put forth an immensely better effort than this one or they can go ahead and immediately unpack their luggage because they'll be staying home. Spoelstra cautioned that a series doesn't really start until a home team loses. That may be true but the Sixers have turned into a jump-shooting team with little in the way of easy buckets and consistent defensive stops, a losing formula against a determined Heat team with much to prove instead of looking they're content to have just made the playoffs.