Share All sharing options for: Heat Show Mettle In Win

Teams that fall down 0-2 in a best-of-seven series – mostly those without home-court advantage – typically come out with energy on their home courts in Game 3. It is up to the higher-seeded team to withstand the early punch and win a game on the road. 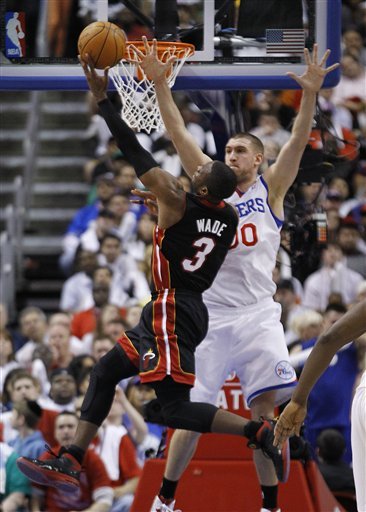 The Miami Heat did exactly that, winning a 100-94 game to take a controlling 3-0 series lead over the Philadelphia 76ers. No team in NBA history has come back from a such a series hole and won the series.

The Sixers did not make it easy for the Heat, scoring the first nine points of the game and never trailing in the first half. Miami appeared to weather the storm in the second quarter, but Philadelphia held a 52-50 lead at intermission. Even when the Heat went on a 6-0 run to open the third quarter and take the lead, the Sixers reeled off 12 straight points to go up eight points.

But Miami led for all but the opening 58 seconds of the fourth quarter, as Dwyane Wade, LeBron James and Chris Bosh led the charge. The Heat made decisive plays to hold off any Sixers chances to come back. Wade slammed the ball home after James missed a 3-pointer in the final four minutes of the game and later found Bosh for a layup. Philadelphia had a glimmer of hope with the ball, down 94-98 with 17 seconds left to go. But the Heat defense stayed alert on the perimeter, and Wade contested a Lou Williams 3 that barely grazed the rim.

After struggling in the first two games of the series, Wade put together his first great game of the 2011 playoffs, closing with 32 points on 10-of-19 shooting from the field and 12-of-12 shooting from the foul line. The 6-foot-4 guard from Marquette also collected 10 rebounds, eight assists and two blocks. Wade set up the Heat offense in the fourth quarter and even looked like a floor general, telling players where to move. Erik Spoelstra closed the game with James Jones and Joel Anthony alongside the Big Three.

LeBron James recorded 24 points on 8-of-15 shooting from the field to go along with 15 boards, six assists and just one turnover. He connected with Wade for two spectacular finishes: in the second quarter, he launched a pass from beyond half-court to Wade, who received the football pass and made an and-one at the rim (no, it wasn’t as pretty as the Wade-to-James alley-oop pass in Indiana); then in the third quarter, James dribbled the ball behind his back to freeze the Sixers transition defense before finding Wade for a two-handed flush. That last play even drew "oohs" from the Philly crowd.

For the first three quarters, Bosh looked as if the moment swallowed him up a bit. He had just nine points through three quarters and let Elton Brand shoot 9-of-15 from the field. But in the final stanza of play, Bosh made a jumper to bail out a broken possession at the start of the fourth and later made a great move. He attempted a shot in the paint, missed on a tip-in but then went back up and made it on his third attempt of the possession. He roared after making the basket, the first time he let out such emotion since Game 2. The Heat used Bosh at the elbow to run a lot of offense in the fourth quarter, and it proved to be effective.

Zydrunas Ilgauskas had 10 points and eight offensive rebounds, tipping in two Heat misses. Joel Anthony closed the game for Miami, playing solid defense and even making a bucket in the fourth quarter. James Jones made two straight 3s in the second quarter and had five rebounds. Spoelstra opted not to play Mike Miller in this game, perhaps finally waking up to the reality that Jones is the better offensive weapon. Miller, who may need off-season surgery on his left thumb, may not play for the rest of the playoffs.

The Heat will try to wrap it up Sunday at 1 p.m.