In a game that was both what I expected and nothing that I expected, the Miami Heat fell to the Philadelphia 76ers for the first time in the 2011 Playoffs (and the first time in 3 years) by the score of 86-82.  Much of the game was an offensive struggle for both teams, but I didn't think that Miami would have as much trouble scoring as they did, especially late in the game.

The Sixers got off to a fast start, which most of us could've expected, jumping all over the Heat in the opening quarter.  When you talk about Philly's offense its something that is pretty predictable, especially when breaking down how and when they succeed as opposed to when they don't.  It's pretty simple, really.  They aren't much of a driving team, so when they hit their outside shots they do well and when they miss they don't do well.

The shots were falling for the Sixers in the early stages of the game, which allowed them to jump out to a double-digit lead on the Heat for most of the 1st quarter.  Miami would have a hard time shooting the ball pretty much the entire game, but were able to come back in the 2nd quarter thanks to Philly beginning to miss most of their looks.

When the 2nd half rolled around the game was pretty tight, and it stayed that way though you did get the feeling that the Heat was somewhat in control.  That was until the ugly final quarter in which Miami went ice cold and at times seemed more interested in running off clock then they did on putting points on the board. Still, the Heat had the lead late in the 4th quarter and had the game in their hands.

An ill-advised Mario Chalmers 3-point miss with under a minute left would prove to be a bit of a turning point, late as it was.  From there the Sixers scored back-to-back triples, including a Lou Williams trey with about 8 seconds left, and just like that Philadelphia went from down by 4 to up by 2.  The crowd at the Wells Fargo Center was going crazy and I got to stand there with a dumb smirk on my face trying to think about how the Heat were going to score 2 points when it had been so difficult for them to put points on the board for the last several minutes.

That question was answered rather quickly as the ball was inbounded to LeBron who immediately took it to the hole and barely got off an ugly look that ended up being blocked by Elton Brand.  I'm still not sure why LeBron was trying to score when he was covered by Andre Iguodala (great defender) while D-Wade was covered by Jrue Holiday (average defender), but it is what it is.  Philly fans got treated to a great Easter Sunday (the Flyers also won, in overtime, to avoid elimination) while Heat fans get to look forward to another game to go to this week.

Game 5 from the AAA is gong to be Wednesday night at 7.  Here are a couple pics I took from the game yesterday.  I hope everyone had a happy Easter. 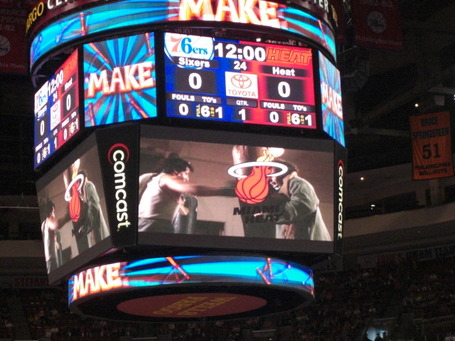 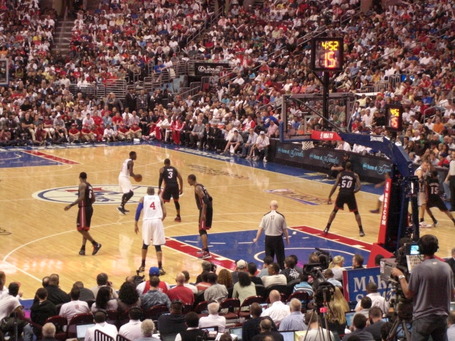 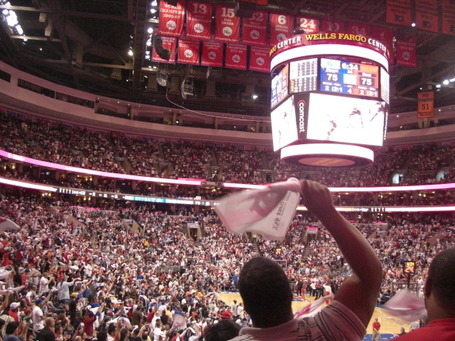