Heat's Loss To Sixers Nothing To Worry About (Yet)

Share All sharing options for: Heat's Loss To Sixers Nothing To Worry About (Yet) 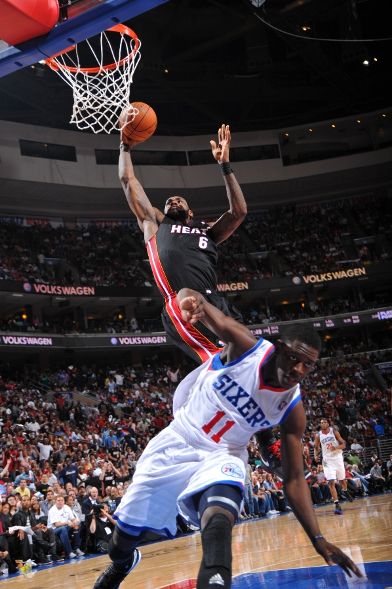 Yes, those last couple of minutes of the game were atrocious.

But losing the fourth game of their first round series might prove to be a good omen for the Miami Heat's championship aspirations.

Since switching to the best-of-seven format for the first rounds, no eventual NBA championship team has swept their first opponent.

With or without history on their side, the Heat will ultimately benefit from being forced to play a Game 5 in Miami on Wednesday. An entire week of rest sounds good on paper but it could also disrupt your team's mojo with only practices and meetings that do nothing to match a playoff game's intensity. Boston's aging Big 3 could use all the rest they can get but the Heat's younger star trio don't need it when there are multiple days off between games anyway. Ailing players like Mike Miller and Udonis Haslem would still be healing this week regardless of tonight's game. Besides, it's not like the Celtics get to face the Heat on the second night of a back-to-back. Miami has home-court advantage in the next round so they don't even have to leave town if the series wraps up tonight.

An extra game might also convince the coaching staff to insert Joel Anthony and Mario Chalmers earlier into the first quarter if the Heat once again come out flat with their current starting line-up featuring Zydrunas Ilgauskas and Mike Bibby. Speaking of Chalmers and Bibby, maybe they can find their shooting touch tonight. Lord knows the Heat will need it against the Celtics.

Remember, a potential Heat-Celtics 2nd-round series would not have started any sooner had they swept the Philadelphia 76ers. If Miami takes care of business tonight or in a Game 6 in Philadelphia on Friday, the series would still start on Sunday in Miami. Having said that, the Heat will be at a serious disadvantage if they lose Wednesday night but win Game 6 because they would only have a day off on Saturday before starting the series with Boston.

Bottom line: Win tonight or it could get complicated quickly.