Share All sharing options for: Heat Roll Past Nets

For the first time during the Miami Heat’s four-game road trip against the four worst teams in the NBA, the Heat built an early lead. LeBron James punished Sasha Vujacic in the post, Mike Bibby and Erick Dampier had two nice pick-and-rolls in the first quarter and Miami jumped out to a 21-point lead in the early stages of the second quarter. 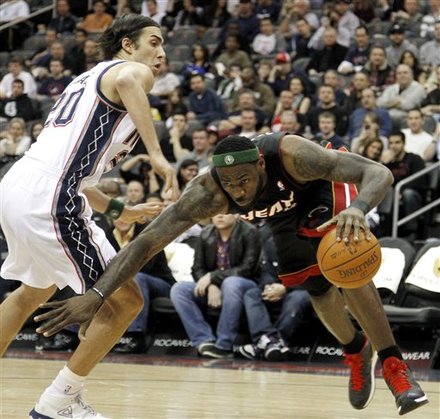 But the complacency eventually settled in, as the Heat allowed the New Jersey Nets to cut the lead into single digits in the second half. The superior team held on for a 108-94 victory, though, enabling Miami to stay a half-game ahead of the Boston Celtics for the second seed. Miami’s win coupled with the Orlando Magic’s loss to the Toronto Raptors today also clinched the Southeast Division title for the Heat, the franchise’s first since the 2006-07 season.

Dwyane Wade suffered a thigh bruise in the first quarter after colliding with Travis Outlaw. Wade did not return to the game until the third quarter, when he played more as a facilitator and less of a driver, although he did have a nice and-one just before the fourth quarter. The 6-foot-4 Marquette product finished with 18 points on 7-of-13 shooting from the field and five assists in just 27 minutes of action.

With Wade not playing at full strength, James was more than happy to carry the load. The two-time reigning MVP attacked the basket from the beginning of the game, completing a nice alley-oop off a pass from Wade in the first quarter. The highlight moment for James came when he faked a pass to Mike Miller in transition and turned his body around 360 degrees for a layup in the second quarter. James finished with 31 points on 13-of-18 shooting from the field, 11 rebounds, seven assists and three steals. He might have gotten a triple double if Erick Dampier and Zydrunas Ilgauskas finished a few easy layups.

Chris Bosh took just nine shots in this game but finished with 16 points on 6-of-9 shooting and seven boards. Bosh showcased a skill he has not utilized much in Miami: passing into the post. The 6-foot-11 power forward gave Ilgauskas a few nice passes inside for easy layups. On the flip side, Bosh shot 4-of-7 from the line. Bosh is an 80 percent free-throw shooter, but James also missed a three three-throws.

The Nets even went to the Hack-a-Dampier strategy at the end of the game. And despite costing James a few assists, the center combination of Dampier and Ilgauskas played well. Dampier finished with 10 points, 14 rebounds and two blocks, swatting away a Deron Williams layup attempt in the fourth. Ilgauskas had 11 points, showcasing some moves from his repertoire that he used in his prime.

Miller and Mario Chalmers returned from injuries to play in this game. Chalmers shot just 1-for-5 from the field and may not regain the starting position before the playoffs. Miller made his first two shots, but missed all 3 of his attempts from downtown. After Miller launched a 3 that clanked off the rim in the fourth quarter, Wade just sat on the floor with a disappointed look. That’s how we all seem to feel when Miller takes a three. James Jones, on the other hand, knocked down 3 triples.

The Heat will return home for a Wednesday night game against the Milwaukee Bucks.