Answering the Heat fan's question: What is a Liverpool?

Share All sharing options for: Answering the Heat fan's question: What is a Liverpool?

It was an unusual announcement Wednesday, when LRMR (the marketing company founded by LeBron James and friend Maverick Carter) announced a partnership with Fenway Sports Management (the management wing of Fenway Sports Group, which owns the Boston Red Sox, among other interests) in which it would become James' worldwide representative in exchange for a share in Liverpool Football Club (another FSG property). It's quite confusing, but in short, LeBron James will now be partners with FSM in seeking out marketing agreements and now owns a minority share of Liverpool Football Club.

For most, it may be a small note on a slow news day for the Heat. For some (including myself), it was pretty awesome. For you see, my friends, I am a LFC supporter. So let me try to answer your question: What is a Liverpool?

Liverpool Football Club was founded in 1892, and became one of the most powerful forces in soccer throughout the 1970s and 1980s, dominating English soccer throughout that time. The club is marked by triumph (18 league titles, 5 European Cups) and tragedy (stadium disasters at Heysel and Hillsborough), and has struggled during the last two seasons after reestablishing itself as one of the best clubs in England during the mid-2000s. Perhaps the club's brightest moment came in 2005, when after trailing 3-0 at halftime to Italian giant A.C. Milan in the Champions League final (the biggest prize in Europe), Liverpool scored three times in six minutes to tie things up and ultimately win the title in penalty kicks. For those of you who mock soccer's low scoring, you can imagine how exciting that would be. It was so exciting, in fact, it converted me from soccer hater to futbol fanatic.

So why does this matter here? Because one of sports' biggest stars just literally bought in to the club. Teams like Manchester United and Chelsea have enjoyed some niche success in the United States (more than Liverpool, certainly), there's been nothing in particular to really attract fans except for their success. Now, the prospects for Liverpool's popularity in the States must certainly jump. It also paves the way for athletes to gain equity in other teams, something that has to be nearly unprecedented in American sports. Liverpool is the eighth-highest valued soccer club in the world, and LeBron is now an investor. As the club's prospects for titles improve, LeBron's bottom line will as well.

And it matters here because I get a chance to share the greatest fan expression in all of sport. It's the singing of "You'll Never Walk Alone" by Liverpool supporters. Now you wouldn't think a showtune from the Rodgers and Hammerstein musical Carousel would be a big hit in the sporting world. But its singing by a stadium full of fans is both inspiring and chilling. The best (in my opinion) came in 2005, when Liverpool defeated the aforementioned Chelsea to reach the aforementioned Champions League final. It was so good that the defeated manager ("Special One" José Mourinho) applauded the performance as he left the field vanquished (see at approximately 3:33). To use Heat terminology, they are appropriately Fanned Up.

This is just the tip of the iceberg that LeBron has bought into. Liverpool Football Club has a unique and rich history which dates back longer than the history of the City of Miami. While I hope he gets a chance to develop something deeper than just a business relationship with the club, I also hope his deal will allow others (who are now like how I once was; disengaged from soccer) to find a reason to follow the sport — and perhaps follow Liverpool.

One more reason this deal is so good for everyone: it allows me to share this photo. Me, on the right, yelling like a jackass after an A.C. Milan goal in the 2007 Champions League final. Wasn't a good day for me. 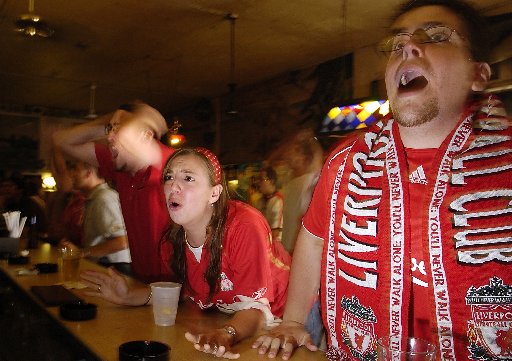