In Pictures: The Luxury of Shooters

Share All sharing options for: In Pictures: The Luxury of Shooters

The mid-range shot is one of the lowest percentage shots in the game, one that defensive structures are designed to provoke before succumbing to any other attempt at a bucket. Of all the things Dwyane Wade has either chosen not to or has the freedom to do, shooting from mid-range isn't one of them.

Although shots from beyond the paint are not nearly as successful as in the paint (66.6 FG% on 7.2 FGA this season for Wade, 72.1% on 5.9 for James), a reputation to take and make a relatively high percentage of them is a perfect medium to opening an array of opportunities for the player and players surrounding them. In this facet of the game, players considered to be capable shooters have the upper hand.

The Boston Celtics have the luxury of shooters in Ray Allen (a SHOOTING guard) and Paul Pierce, whose numbers are not extravagant by any means, but whose reputation to nail their fair share of deadly shots from mid-range and beyond draw so much attention that it often opens opportunites for their teammates -- usually, their usual screeners Kevin Garnett and Glen Davis.

In this episode of In Pictures, we take a look at the convenience in having shooters all around to space the floor and the opportunites it creates for the Celtics. Miami will have to be on their best defensive timing to counter the ongoing green jersey motion perpetually surrounding them.

First, take a look at the luxury in the lineup of Rondo, Allen, Pierce, Davis and Garnett. The only player who can't shoot is the distributor, who is sure to find the open man and remain productive at the end of the play. One thing that has irked many basketball connoisseurs is the amount of gratuitous space given to Rondo to comfortably scan the field in front of him, giving him ample time to use his excellent court vision and make the right play. Chalmers and Bibby would best prove useful by cautiously smothering him. Enough for his field of vision to become a secondary function to keeping the ball away from his defender. 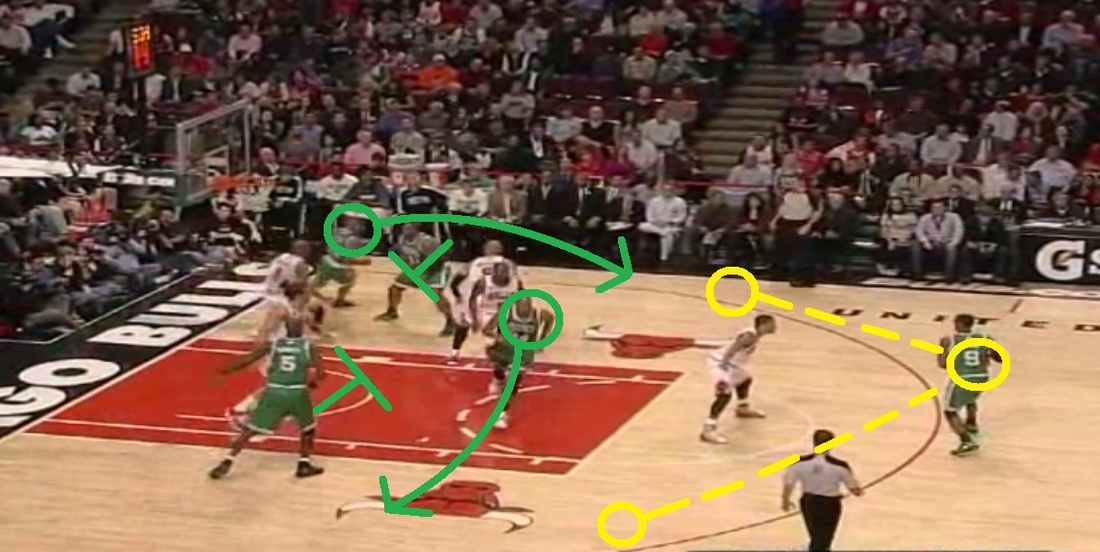 The double screen courtesy of the bigs for the shooters is precise and deadly. Here, Garnett is screening for Pierce who is stepping out for a possible shot from mid-range and beyond. Davis is similarly setting his svelt body for Allen to turn the corner at his usual staggering speed for a possible bomb from beyond-the arc. Rondo's body motions are telling of a pass to Allen, but.... 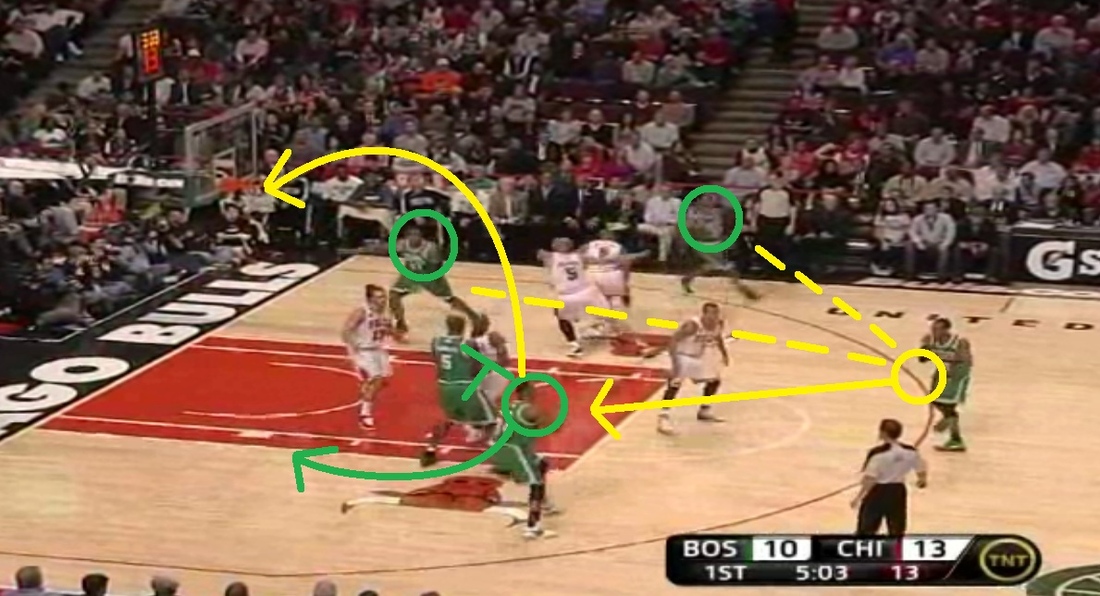 Of course, Davis' defender is aware of Allen's shooting abilities and steps out to deny the pass and be in better position to contest the shot. Davis cuts towards the basket and gets a small window of time to receive the ball for an attempt close to the rim. Rondo could feed Davis, go with the best three-point shooter in history, or feed Pierce's offensive arsenal. He fakes to Allen but makes a timely pass to Pierce, who is open for a shot or can opt for a drive to the rim.

Pierce opts for a drive to his left and spots up for what could be a shot, a pass to Davis who has now gained the real estate under the rim or hand it to Garnett whose defender is busy attempting to deter Pierce's actions.

Pierce chooses Garnett and he returns his team the courtesy by making a wide open shot. It's a mid-range shot, but a wide open shot nonetheless. You can see Rondo's defender taking a step to help on the open Garnett, but Rondo quickly drives towards the rim to serve as just another option in the carousel that is the nightly Celtic passing clinics (23.4 APG - 4th in league).

On this pictorial occasion, the defensively oriented Bulls were the victims of the mis-direction from Rondo, the decoy Allen or Pierce can be, the steady screens and timely cuts from Davis and Garnett along with the multiple options created by their versatility. It's just the luxury of having shooters on the floor versus the predictable packing of the paint to avoid a Wade or James entry, daring them to shoot instead. Maybe, for the purpose of further creation, sometimes they should.