Share All sharing options for: Heat Prevail Over Celtics In Testy Game 1 Victory 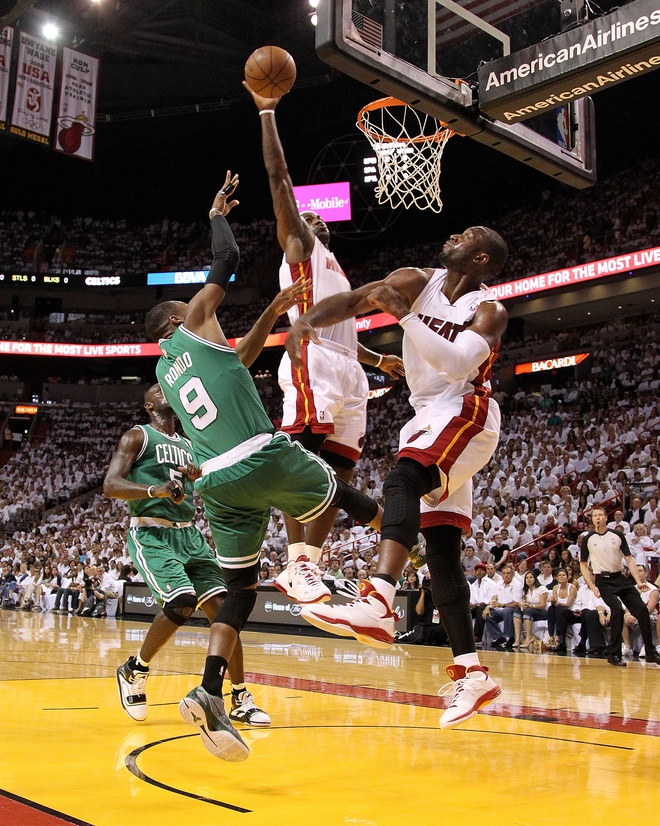 The Miami Heat took the first swing in a hotly contested 99-90 Game 1 victory over the Boston Celtics.

Paul Pierce got tossed, Dwyane Wade went flying in the stands, and James Jones went nuts beyond the arc. There really is nothing like playoff basketball.

The Heat held a double-digit lead throughout most of the game 99-90 and yet the Celtics went on several mini-streaks to keep the game within reach, mostly behind an unlikely-to-be-seen-again-in-this-series 12 for 24 accuracy in three-point shooting. Ray Allen seemingly couldn't miss from any spot on the floor, a regular occurrence when facing the Heat.

Other head-scratching moments included Jones attempting (and nailing) ten free throws in one game. With Chris Bosh and Kevin Garnett basically canceling each other out, the Miami native (who grew up a Heat fan) was also 5 for 7 exclusively from three-point land and whose offense was sorely needed off the bench. Surprisingly, Mike Miller not only played in the game but was quite effective in his 8 minutes of spot duty and was +13 for his team with some nice hustle plays and a few rebounds and assists to show for it. Fellow bench players Jones was +14 and Anthony was +15, likely the reason why the second unit not only was able to hold the lead the starters had built but increase it in the first half.

Pierce received both of his technicals in separate skirmishes with James Jones and Dwyane Wade within a minute of each other. Maybe Doc should have sat him down to cool off after the first incident could have easily led to being tossed automatically when he tapped Jones with his head. The Celtics forward was clearly angry for being wrapped around by Jones after getting caught in the air and coming down hard on Pierce. After the game, both coaches saw it differently with Erik Spoelstra insisting Jones was merely trying to prevent Pierce from getting a three-point play and Doc Rivers thought it should have been a flagrant foul. But even more controversial was the second one after Wade fouled him while setting a screen.

"I didn't really think anything happened that warranted him getting a tech, obviously it was his second," said Allen in defense of his teammate. "It's emotional. D-Wade is trying to run through him, he's trying to set a screen, I don't think he did anything over the top."

At the same time though, Allen didn't sound too pleased with Pierce's actions.

"It's us learning how to get out of those situations and back away from them. Anything can tick a referee off. That's why we always say to not allow the game situations to be put in their hands, you got to make sure you're being smart out there."

If you watched the game, you don't need me to tell you how brilliant Wade was in this game. Yet before the game, Spoelstra seemed like he knew Wade was overdue for a monster game against the Celtics.

LeBron James was no slouch either but the Heat's biggest advantage was that their Big 3 didn't have to do everything to give their team a chance to win the game. With little bench support, the Celtics had to keep up with the Heat with Rajon Rondo (a low key 8 points, 7 assists, 7 rebounds and 5 turnovers performance) and Jermaine O'Neal in foul trouble and none of their players aside from Ray Allen shooting it particularly well.

The play of newcomers Jeff Green and Nenad Krstic predictably failed to make up for the loss of Kendrick Perkins. One has to really question whether a rusty Shaquille O'Neal can really come back in this series after a series of injuries and make a difference?

A playoff series supposedly doesn't start until the home team loses but the Heat needed to set the tone in this series and get a confidence-boosting first victory. It also needed the expected Game 7 to be at home or there was little chance for the upset. Now it's the Celtics turn to answer back in Game 2 and the pressure is on them. After just one game, it's hard to imagine emotions running any higher than they did already today.