Heat fans have taken a lot of unnecessary flack this season for their inability to show up on time, their general indifference to the game of basketball, and their "unworthiness" to witness LeBron James play the game of basketball. To be quite honest, some of the criticism has been deserved. Heat fans do show up late, particularly in the lower bowl. I don’t expect anyone to tell me how to enjoy my game experience, so you won’t see me do the same here. It’s frustrating, but if I had access to the parties and lounges that those fans do, you’d probably never see me in my seat either.

No, what bothers me is the insinuation that Heat fans are bandwagoners. It’s funny to me that fans of storied franchises (looking at you Boston) criticize the Heat for not having any "real" fans. I guess we can totally disregard that the Heat franchise is the same age, 23, as me and is in a market that is full of transplants. We can forget that the people with real money in this town didn’t grow up watching the Miami Heat, and thus don’t feel the same connection as other cities do to their teams.

I don’t know what makes a bandwagon fan, but I decided to do a little research regarding team attendance when it comes to the Heat and Celtics. Hilarity ensues.

Here are the average capacity figures:

Playing with arbitrary endpoints can be a fun and dangerous exercise. For example, in the last eight seasons, both franchises have won a title, had three elite seasons and had the at least three Hall of Famers playing at a high level. In those eight years (2004-2011), the Miami Heat had a higher average attendance than the Boston Celtics. The 10-year averages are very similar, as are the five-year averages. The only real difference can be seen in the last three seasons where Heat fans were told to wait until the summer of 2010.

But these numbers without any context can be misleading, so here’s a graphical representation of the last decade. 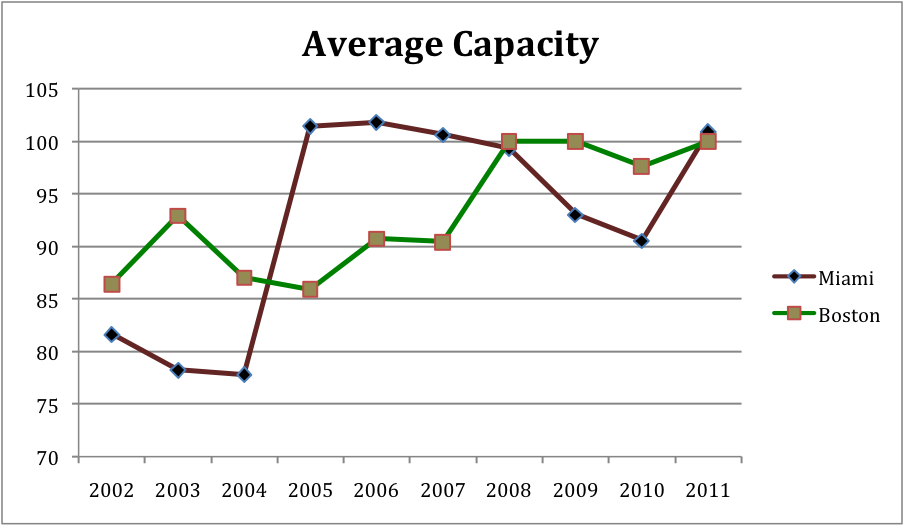 As you can see, yes, the Heat has had a big jump in attendance in 2011, but it mimics a jump in 2008 for the Celtics. Anyone have a guess as to what happened in 2008? What’s that you say? That’s when Kevin Garnett and Ray Allen came to town? Never would have guessed.

Here are the attendance figures from what we’ll call “Pre-Big Three” years:

Again, yes, the Heat experienced a large jump in attendance with the arrival of Chris Bosh and LeBron James, but once again, we see that it is nothing compared to what went on in Boston.

I have a hard time listening to the Celtics fans that reside on Mt. Pious call Heat fans bandwagoners, when they themselves fit their very definition.

Also, just as a little aside, since 1988, the Miami Heat’s first season in the league, both Miami and Boston have the same number of NBA titles. Enjoy your summer, Celtics fans. See you next fall.