Share All sharing options for: Bulls Stampede Past Heat

While most Miami Heat fans dismissed the Chicago Bulls’ 3-0 season series sweep of their foe in the Eastern Conference Finals, one common theme that appeared in those three games was that the Bulls won the rebounding battles easily. Perhaps everyone involved with the Heat should go back to basics on that department. 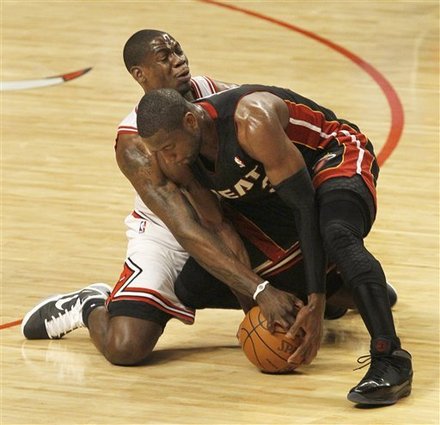 A Pat Riley team getting crushed on the boards? Riley has always said, "No rebounds, no rings." But the Bulls grabbed 19 offensive rebounds, defeating the Heat in the battle of the boards 45-33. On several possessions, Chicago would miss a field goal attempt but then grab the board. With the Miami defense scrambled, the Bulls would find a 3-point shooter wide open.

That was the story of the second half, as Chicago blew out Miami 103-82 after the game was tied 48-48 at intermission to send the Heat trailing in a series for the first time this postseason. To compound Miami’s struggles on the glass, both LeBron James and Dwyane Wade had off shooting nights.

Who was the lone bright spot for the Heat? The man derided as part of the "Two and a Half Men." The emotions didn’t get to Chris Bosh in his first game in a conference final series, as he finished with 30 points on 12-of-18 shooting from the field and 6-of-6 shooting from the foul line. Bosh also had nine rebounds, but only two of them came in the second half. The 6-foot-11 power forward played very well offensively, getting into the paint as opposed to settling for jumpers, which he did in his miserable 1-for-18 shooting night against the Bulls earlier this season.

Wade shot just 7-of-17 from the field and turned the ball over four times in a return to his hometown. The 6-foot-4 guard from Marquette did not make one trip to the foul line in the second half. He and James need to attack the Bulls defense that packs in the paint. They both found a way to do that against the Boston Celtics, a team that operates under a similar defensive philosophy. Tom Thibodeau even served as an assistant coach to Doc Rivers before taking the helm in Chicago.

James finished 5-of-15 from the field and committed four turnovers. He did find Bosh for some nice layups and dunks on pick-and-roll plays, but the two-time MVP has to play more aggressively.

Most people will figure that the Heat’s two superstars will find a way to adjust their offensive games and play better. But Erik Spoelstra needs to work on his players with rebounding in the two days in between Games 1 and 2 of this series. Multiple Heat perimeter players leaked out into the court after challenging a shot, only to see the Bulls players grab their own rebounds and get second-chance points.

Spoelstra went small several times in Game 1, playing James at the power forward position or Bosh at the five. That strategy ended up surrendering a lot of offensive rebounds. It’ll be interesting to see if Spoelstra will continue to do that. Part of the gap in rebounding falls on the players for failing to box out. Wade, who is usually a good rebounder for a guard, only grabbed three boards in Game 1.

To defend Bulls center Omer Asik, Spoelstra activated Jamaal Magloire and played him 10 minutes. Magloire showed the rust, as he missed a wide-open dunk in the second quarter, although he did score on the put-back. Magloire also committed a hard foul on Derrick Rose in the fourth quarter, one that could draw future repercussions.

As the game got out of hand, Spoelstra played Udonis Haslem. Haslem missed his only field goal attempt of the night, but it hit the rim at least. His first shot attempt since late November, which occurred in Game 4 of the Heat’s previous series, only touched the backboard. The Heat need Haslem’s rebounding later in this series, though.