Following a Game 1 that several members of the Miami Heat would like to forget, they all will finally get their chance for redemption on Wednesday night in Chicago.  Both LeBron James and Dwyane Wade had ‘off' nights on Sunday, combining to make just 12 of their 32 shots while turning the ball over 4 times apiece.  Obviously we can't expect them to be on top of their game every single night, so hopefully this was just an isolated incident and we see things get back to normal tonight.

After leading most of the 1st half of Game 1, the Heat just fell apart after halftime.  The Bulls shot just 33.3% in the 3rd quarter but 10 second chance points kept them in front of Miami and ultimately sent them to the loss.  Statistically the Heat had just as good of a game, if not better, on the defensive end as Chicago but as we all know the struggles on the glass are what absolutely killed Miami and what they need to fix if they want to get out of the windy city with a split of the first two games.

You have to assume that we'll see some kind of change in the Heat lineup, whether its dressing and playing Zydrunas Ilgauskas and/or Erick Damper or giving Udonis Haslem a more important role, there has got to be some kind of change that tilts the scale back in Miami's favor in the rebounding department.  It's not like the Heat were having a hard time boxing out and getting dominated in the paint; the Bulls were just flying all over the place and many of their rebounds were on very athletic plays where guys were hustling all over the court to beating Miami players to the missed shots.

I'm sure if you took a vote amongst Heat fans they would prefer to see more of Udonis, as would I, but I have to figure that the reason we haven't seen more of him is because they are gradually easing him back into the swing of things.  But now with the Heat trailing in a series for the first time in this postseason, if Haslem can step in and be the productive guy that we know he is capable of being then Coach Spo should get him back into the rotation.  Tonight's game will be a telling sign as to whether or not Udonis is truly in game shape.

Tipoff from the United Center is set for 8:30 and the game will be broadcast on TNT.  If you have been lucky enough to go to some of the Heat's playoff games this year, you have seen a steady rise in the price of tickets.  Our friends at TiqIq came up with this graphic that shows the average price of tickets for each round of the playoffs compared to the regular season. 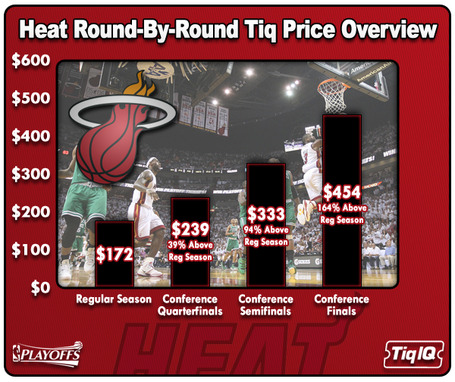