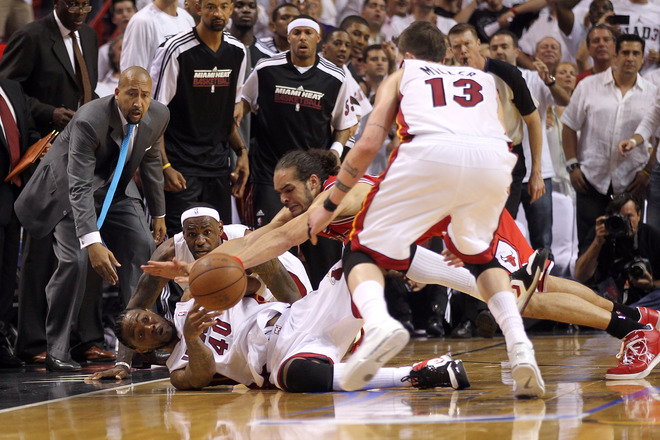 The Bulls didn’t lose three straight the entire regular season. Now they must beat the Heat three straight or the #1 seeded team in the league will last as long as the Philadelphia Sixers and the Boston Celtics did.

"This series is an absolute bloodbath," said Heat coach Erik Spoelstra. "That game tonight was a total grind. It was about as competitive and physical as it can be."

"They’re a great team," conceded Bulls coach Tom Thibodeau. "They compete, they play hard, they play great defense, they made some tough shots down the stretch. It was a hard-fought game and they made plays at the end."

Derrick Rose, the MVP, scored 23 points but took 27 shots and had 7 turnovers, forcing the issue because he has to. But let’s put aside the notion that he has no help. Luol Deng and Carlos Boozer each had 20 points and collectively grabbed 19 rebounds and Joakim Noah grabbed 14 rebounds, 6 on the offensive glass. His supporting cast gave him quality minutes and the Bulls held leads in the second half but simply couldn’t withstand the Heat’s tenacious D and clutch scoring by their superstars in OT. Nevertheless, with Wade struggling the Bulls had plenty of chances in the fourth quarter to tie up the series and get the home-court advantage back.

"Tonight definitely it was on me," said Rose. "I had two opportunities to end the game. Couldn’t do it. If anything, learn from it. Too many turnovers. Really was my fault, but I’m going to learn from it."

This isn’t the only lesson he’ll learn from tonight. He’ll realize sooner or later he can’t do it all by himself in the playoffs against elite teams. Wade, Bosh and LeBron already learned that lesson and the Bulls are paying the price for it, only fitting for a team that lost out on the Big 3 and proceeded to overachieve in the regular season.

Take your pick over the most surprising element of this fascinating series. Haslem and Miller not just returning to the floor but integral members of an 8-man rotation? How about Bosh consistently scoring when the Heat needed baskets the most? The Heat's bench neutralizing what should have been a key advantage the Bulls supposedly enjoyed over the Heat? (What happened to all that size and toughness the Bulls had over the Heat?)

There were little moments here and there from each supporting player. Mike Bibby with the timely three-pointer down 57-48 four minutes into the second half to stop a 9-0 Bulls run in the third quarter and cut their lead in half. Miller with those huge baskets in the second half to go along with his quality rebounding and trademark hustle plays. Mario Chalmers nabbing 4 steals and was perfect from the field (3-3 and 2-2 beyond the arc).

And the inexperience of the Bulls in the playoffs has been evident. A perfect example was the unforced turnover with 90 seconds left in OT off an inbounds pass by Luol Deng to Noah that sailed out-of-bounds. Then on their next possession Rose loses the ball on his own as he ‘s dribbling towards the paint. Come to think of it, maybe it wasn’t just inexperience and it had more to do with the Heat’s defense. The one that wasn't supposed to be as good as the one the Coach of the Year had drawn up.

“We kept fighting,” said Deng. “but all it took was five minutes.”