Game 1: What Worked, What Didn't and What to Expect

Share All sharing options for: Game 1: What Worked, What Didn't and What to Expect 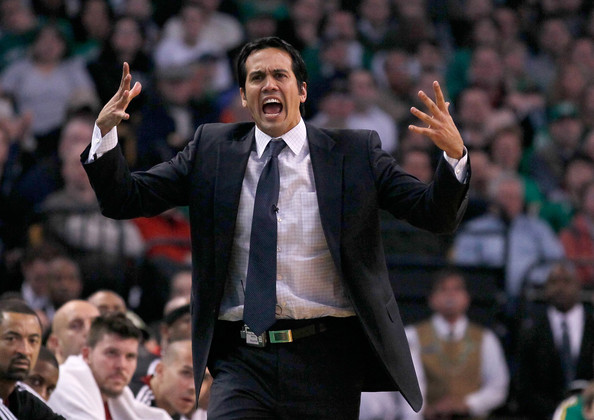 It has been interesting to read the reactions to the Miami Heat’s game one victory over the Boston Celtics. I’ll take a look at what worked, what didn’t, and what to expect in Game 2.

What Worked for the Heat

Quite simply, Dwyane Wade finally showed up. After struggling in the first four matchups, Wade came out firing in the first quarter, scoring 13 points in the frame. He didn’t let up and finished with a game high 38 points. However, the performance Wade put up will be hard to replicate. He shot 71.4% on long twos and made two of his five three-point attempts. While the shots were dropping Sunday afternoon, there’s very little reason to believe that they will continue to fall at the same rate tonight.

The Heat bench was great.  James Jones blew up in Game 1, knocking down five threes and finishing with 25 points.  Jones was often forgotten on the perimeter, and he made the Celtics defense pay.  Jones’ plays were very much a function of the attention demanded by LeBron James and Dwyane Wade.  Jones also baited Paul Pierce into a technical foul, and drained all ten of his free throws.  The rest of the bench was quiet on the scoreboard, but outplayed the Boston reserves badly.

What Didn’t Work for the Heat

Chris Bosh was held to seven points on 3-10 shooting.  While he did grab 12 rebounds, the Heat expect and need more production on the offensive end.  After playing well in the last two Boston games, Bosh regressed into his earlier form.  While it is not necessary for Bosh to dominate, seven points and 30% shooting is not a winning recipe for the Heat.

Once again, Ray Allen shredded the Heat.  He was the top performer all season long against the Heat, and Game 1 was no different.  He scored 25 points on just 13 shots, while making five of his eight three point attempts.  The only thing the Heat can take solace in, is that Wade was so excellent on the offensive end.

What to Expect in Game 2

I believe that the insistence that the Heat may have gotten lucky in game one is absurd.  The Heat were finally able to break through on isolations, and continued their production in spot up opportunities.  Yes, the Heat probably took too many long twos, but with the Celtics packing the paint, the Heat didn’t force the action.  Also, many of the looks from distance were wide open.  While I’ll never encourage Wade or James to fire from distance, I will always be in favor of the Heat taking open shots.

Also, the shots from Sunday will have to have an effect on the Celtics game plan for Game 2.  Miscommunications and the desire to help led to James Jones’ opportunities.  “Fixing” these issues will give both Wade and James more room to operate; a risky proposition for Doc Rivers and his team.  If and when Mike Bibby or Mario Chalmers start hitting shots, the Heat will be very tough to defend.

After watching all of Chris Bosh’s possessions, I think Game 1 may be more of an aberration than an expected performance.  Bosh’s shot selection for the most part was fine, he just missed shots he normally makes.  Most of the looks he received were on spot-ups from the elbow, a shot he has proven to be proficient at.

However, I will be interested to see how the Heat use the pick and roll with Bosh.  The Heat’s ball handlers in the pick and roll offense were more successful in Game 1 than they had been all year against the Celtics.  They produced .88 ppp after finishing the season with a .61 ppp against the Celtics in the regular season.  I noticed that very few of these screens involved Bosh.  Most possessions were off of screens by James, Ilgauskas or Anthony.  My assumption is that this was by design to avoid having Kevin Garnett jump the screen.  By keeping him away from the ball handler, the Heat were successful.  When Glen Davis was matched-up on Bosh, the Heat attacked him, but mainly in the post.  It will be interesting to see what adjustments Miami and Boston make in the power forward battle.

LeBron James was quiet in Game 1 (as quiet as you can be while putting up 22/6/5), but I don’t expect that to remain the case.  James performed well against the Celtics defense all season, but had his production drop Sunday.  This also happened in the first round match-up with Philadelphia in which he probed the defense in Game 1 before attacking later in the series.  I would look for James to make the necessary adjustments and be more aggressive.  Only five of James’ 19 attempts came from inside of nine feet; I expect more shots at the rim for James tonight.

Sunday’s game got a little “chippy” according to Doc Rivers, and I doubt the chippiness will subside any time soon.  The Celtics have built their mystique on bullying their opponents, but on Sunday the Heat gave it right back.  As I said in my preview, I don’t think the Heat are scared of the Celtics as some analysts have indicated.  Game 1 showed that the Heat won’t back down.  It will be extremely important to remain in control tonight though, as Celtics head games can be expected.

Overall I expect both teams to cool off from three-point range.  I think Bosh and James will both have increases in their production.  Bosh missed open jumpers in Game 1 and James was a little tentative.  I don’t expect either to continue.  Also, over the course of the season, the Heat were a great rebounding team yet in Game 1 they finished with the same number of boards as the Celtics.  If Shaq doesn’t play extended minutes (I don’t think he will), the Heat should be able to take advantage.  Finally, I think both teams will continue to shoot a lot of jumpers.  They have done so in every matchup and it’s what the defenses allow.

It will be imperative for the Heat to capitalize on open opportunities and to attack the rim when the defense allows it.  If the Heat exhibit the same defensive intensity they have during the last two head to head games and avoid the extracurriculars the Celtics will try to engage in, they should be in good shape.

I can be found on Twitter at @DannyMartinez4. Sorry there are no cool graphs, those will be back after Game 2.