This first half of my NBA Finals (still not used to it) preview will focus on the Dallas Mavericks offense vs the Miami Heat defense. We’ll look at regular season, postseason and head to head numbers. Very little should be read into the head to head matchups, as they occurred very early in the season and featured a wildly different rotation the Heat (broken record alert).

The Dallas Mavericks are by far the best offense the Heat will face this postseason. The 76ers, Celtics and Bulls were all quite average offensively. Including regular season and postseason numbers together, Dallas has the second best points per possession in the NBA at .98. They’ve posted .99 PPP in the postseason thus far.

The Mavericks excel in five particular aspects of their offense: isolation, post-ups, pick and roll roll man, spot-ups and off screen scenarios.  When thinking about how the Mavericks have beaten teams this postseason, these different offensive plays are exactly what come to mind.  Dirk Nowitski has been virtually unguardable.  He is fantastic in isolations, post-ups, and shooting off of screens.  By surrounding him with able shooters, Dallas forces teams to pick their poison. 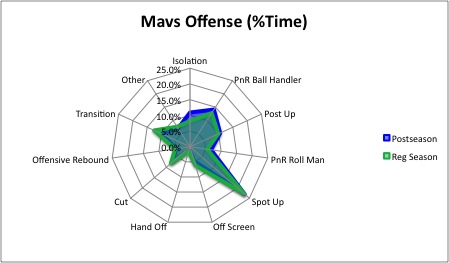 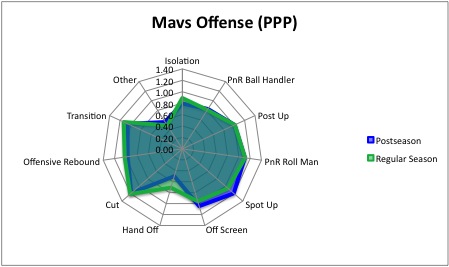 The good news for the Heat is that every facet of offense Dallas is exceptional at happens to be strengths of the Heat’s defense.  The Heat rank in the top six defensively in all five play types I highlighted.  This postseason the Heat have been suffocating on defense, and they’ll need to be against Dallas.  While it’s only a two game sample size, here’s a look at how Dallas attacked Miami and how it’s been attacking teams in the postseason (don’t pay any mind to the bulge for “Hand Off” PPP it’s a two play sample): 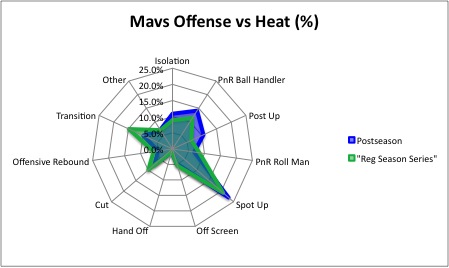 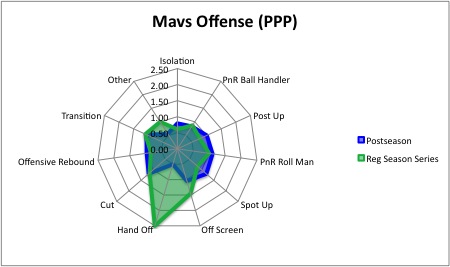 It appears the Mavericks don’t attack the Heat any differently than they attack other teams.  I wouldn’t expect it to change in the Finals.  The offense will run through Dirk, but shooters will be all around the court.  The Heat will not be able to fall asleep on Jason Terry, Jason Kidd or Peja Stojakovic.  JJ Barea brings another issue with his pick and roll expertise, but I’m curious as to how many minutes he’ll be able to play.  The Heat’s point guard-less lineups may ultimately limit his opportunities.

I’ll have the other part of my preview up tomorrow, but it’s probably best to get this out in the open now.  I’m picking the Heat to win in five games.  Yes, the Dallas offense is fantastic and Dirk is otherworldly, but I think they’ll have some issues with the Heat.  The Heat have four guys (Bosh, Anthony, Haslem and James) to throw at Dik to keep him uncomfortable.  Also, I believe the Heat have enough of a physical advantage over the Mavericks to offset any huge deficiencies.  I believe the Heat’s top six players are better than the Mavericks’ s top six players, and I don’t think it’s that close.  We’ll have to wait and see.

I've decided to shorten my posts for numerous reasons, but the main one is that I like reading shorter posts.  I'm going to try and continue to keep the word count low, but the information content high. Just FYI, I had Heat in five over Philadelphia, in five over Boston and in four (oops) over Chicago.  Follow me on Twitter @DannyMartinez4