Share All sharing options for: Heat Take 2-0 Lead Over Celtics Behind Duo Of Wade And James 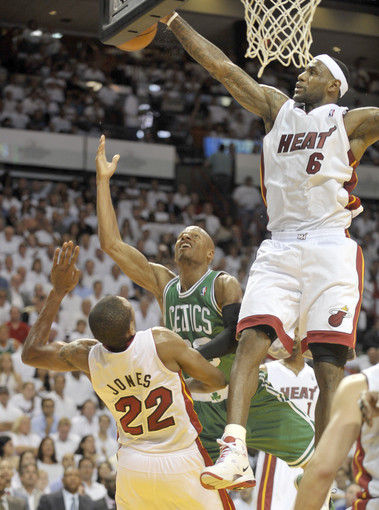 It happened just last week when the top-seeded San Antonio Spurs were beaten down by the Memphis Grizzlies. Now it appears that the same fate could fall to the Boston Celtics. The changing of the guard. Out with the old, in with the new.

The Heat certainly made their enemy look old and it's unclear what Doc Rivers can draw up to counter that.


The Celtics took the first three games against the Miami Heat this season. Every had a good laugh at the upstart, brash Heat's expense. Paul Pierce enjoyed himself on Twitter, boasting about having brought his talents here in Miami.

Now the Heat have countered with three straight victories. If the Celtics want to extend their season, they now must win 4 out of the next 5 games.

While Dwyane Wade and LeBron James had monster games together, it strangely almost didn't matter that the bench didn't score, Chris Bosh had another up-and-down game and James Jones' offense disappeared after his huge performance in Game 1. The Celtics just never had enough to not just catch up to the Heat but actually build a lead of their own.

Joel Anthony has not-so-quietly become the defensive MVP of the series, a hybrid of Dennis Rodman's relentless pursuit of the loose ball and Alonzo Mourning's defensive intensity that energizes your fellow teammates. In just one example of many, the Celtic were breathing down the Heat's neck down only 85-80 at the 5:45 mark of the final quarter when Wade missed a pull-up jumper. The ball could have easily been rebounded and in the hands of either Glen Davis or Paul Pierce with a chance to cut the lead to just 2 or 3 points. Instead, Anthony's athleticism allowed the ball to poke free for LeBron to collect it and slam it through while getting fouled.

Winning both home games must feel good, but let's not forget the Dallas Mavericks felt pretty good about their chances in the 2006 Finals too.

With all the momentum on their side, the Heat have to feel confident that they are indeed the better team right now. But this is far from over. The Celtics no doubt will be tough to beat in Boston. If the Heat can't make a stand, the momentum will have shifted and both teams will travel back down to South Florida in a decisive best-of-three miniseries.

Win at least one in Boston and the series is virtually over. The pressure is squarely on the Celtics to defend their home-court. Plenty of playoff experience and moxie would indicate that shouldn't be a problem. The reality is that Boston's Big 3 have looked old and creaky next to the athletic Heat core of LeBron, Bosh, Wade (and Joel Anthony).