Miami gets a chance to redeem their 2nd half collapse Saturday night, hoping to take a 3-1 lead and avoid giving the Celtics the momentum and confidence to make it a tighter series than games 1 and 2 showcased in Miami.

What's happened and what needs to happen?

There is no necessary change of game plan, other than to find the fortitude to withstand the Celtic's sixth man at The Garden: the boisterous crowd. Bosh admitted his emotions fell victim to the intensity in the building, affecting his confidence and decision-making on the floor. The mental hiccup was not only on the forward, with Spoelstra remaining loyal to his starting lineup in the second half and once again falling behind on the scoreboard, ultimately too much to overcome. After Rondo's dramatic return from a dislocated elbow, the Heat failed to take advantage by attacking the hobbled guard aggressively on offense, or guiding him towards his left on defense. The crowd ultimately fueled the inevitable heroic moments as Miami found themselves in a replay of the first two games of the season in Boston. 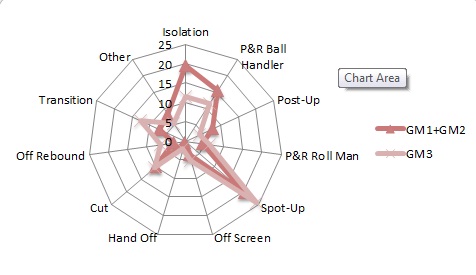 For kicks, one can somewhat see a puzzling division of the Heat’s execution in the above chart.  Games 1 and 2 in Miami actually saw more successful isolation and attacks off the dribble, whereas Game 3 in Boston saw more transition buckets and opportunities from offensive rebounds – ironic, but not telling (taking samples from only 3 games is not nearly enough for concrete deduction).

What is obvious is the simplicity in the Heat’s success, which is to remain focused and relentless, even when consumed in the ire of a crowd 800,000 strong.  The Garden helped Boston to a 33-8 record at home, 3rd best in the league under Chicago and San Antonio, and proven the importance of the Heat’s acquistion of home-court advantage in the playoffs.  Conversely, Miami has shown enough moxie to withstand the antagonistic road, hosting a league best (tied with Dallas) 28-13 record on the road.  As of today, the new Big Three remain winless at The Garden and tonight would be a good day to change it all. Dislocated-elbow-comeback-fueling-the-masses or not.