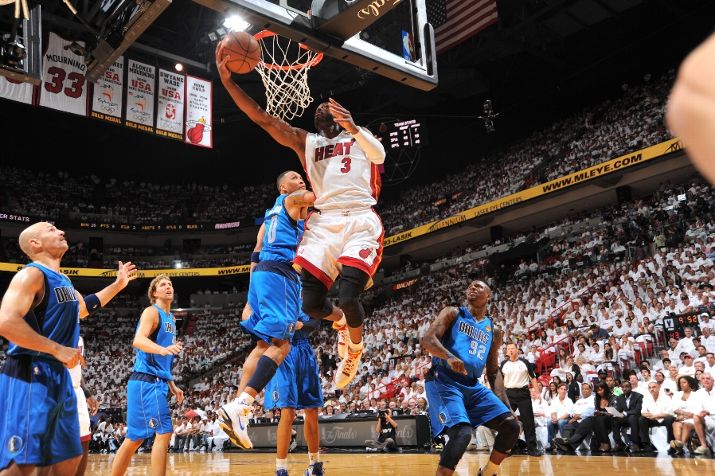 The championship recipe for success has proven to be effective against the Boston Celtics and the Chicago Bulls. So why stop with the Dallas Mavericks in the NBA Finals?

Keep it close for the first three quarters and then rely on Dwyane Wade and LeBron James to finish the game out. Sounds simple doesn’t it?

But it was a team effort of course. The Heat bench outscored the Mavs bench 27-17, which was regarded as being deeper than Miami’s (just like the Celtics and the Bulls appeared to have that advantage). Chris Bosh was the best player on the floor in the first half but struggled through large stretches of the third quarter and the beginning of the fourth. Mike Miller and Mario Chalmers (who surprisingly hit double digits in scoring in the first half while Wade pushed through a slow start) actually made a couple of three pointers each. Juwan Howard scored as many points as JJ Barea did.

"Our bench has been important for us all season long," said Heat coach Erik Spoelstra. "At times they’ve given us defensive energy. I don’t anticipate every game that our bench would outscore their bench."

With both teams missing plenty of field goals and the Mavs unable to block out their opponents while utilizing their zone defense, the Heat were the victors in the rebounding battle. While both teams grabbed 36 defensive rebounds each, the deciding margin was provided on the offensive glass.

“The biggest issue is there’s ten more times we don’t get the ball and they have it. So the possession of the ball was key,” said Mavs coach Rick Carlisle.

The Mavs know that this is just one game and will seek to get a split in Game 2 before heading back home for the next three games.

“We’re a veteran team,” insisted Dirk Nowitzki afterwards. “So you can’t get down with a loss. You have to come back strong on Thursday. So we just have to be a little sharper in some areas. Didn’t think we executed great there in the fourth quarter… and gave up too many offensive rebounds when it counted.”

Even worse, Nowitzki revealed he had torn a tendon in his left non-shooting hand trying to strip the ball from Bosh. While it may not affect his shooting much, Miller could testify how much wearing a splint can alter your game. Dirk might have trouble dribbling out of double teams or securing a tough rebound in traffic.

For the Heat, Spoelstra warns against taking too much out of just one game and is assuredly telling his team the same thing.

“It’s obviously a challenge because of their skill level and shooting,” he said. “It’s one game and that’s it. We’re already moving on to Game 2. We have to continue to stay focused to defend this home court.”

The Mavs know a thing or two about getting ahead of themselves when the city of Dallas was already taking parades after going up 2-0 and defending their home court in the ’06 Finals. But the fact remains that the team that wins the first game in the Finals will win the series 73% of the time. And with the way the Heat are rolling, it's difficult to see them going 2-4 the rest of the way. But stranger things have happened. Again, ask the Mavs about that. They're re-living their struggles against the Heat in the Finals all over again.


But are they really a new Mavs team? Now they must prove it immediately.