Share All sharing options for: Game Over For Heat With 105-95 Loss To Mavs 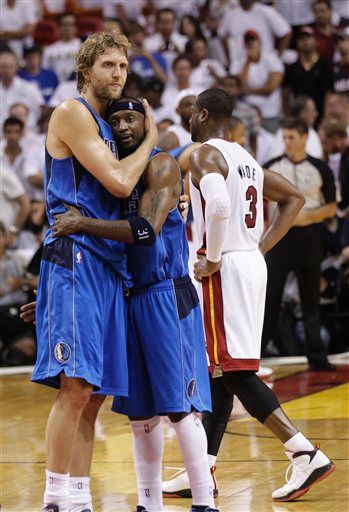 And so the first chapter of this new era of Miami Heat basketball has been written.

But the book isn't complete. Not by a long shot.

The Heat will have a lot to think about over the summer. The Mavs were the better team in this series and deserved to win it but had the Big 3 played to their abilities this would have been a very different result.

The Game 2 meltdown turned out to be an even bigger turning point than we thought it already was. The Mavs victory took home-court advantage but it also allowed them to absorb their own home loss and yet still manage to take control of the series with their next two home games. With the series tied 1-1, the odd 2-3-2 format of the Finals series ultimately worked in favor of the Mavs. No question that the Heat really could have used a home game for the fifth game of the series.

Much will be made of LeBron not stepping in crunch time of the Heat's losses in this series. His many critics (and a certain city) will revel in his failure to step up in the fourth quarter. They couldn't wait for this moment all season long. There's no question he could have, and should have, played more aggressive. The Heat got very little from their bench and 2 starters so they needed him to play great, not just good, for them to beat the talented and deep Mavs.

Nowitzki and LeBron finished with the same point totals and struggled throughout. Both hit 9 field goals and Dirk was even worse with 12 more field goal attempts. But the Mavs won because of the rest of the team stepped up in his place and the Heat simply didn't. With Mike Miller and Udonis Haslem fading since their breakout series against the Bulls and players such as Juwan Howard and Eddie House being dusted off and logging important minutes, it wasn't enough to counter what Jason Terry, Jason Kidd, Tyson Chandler, Shawn Marion and JJ Barea were producing - especially in the first half when Dirk was sitting on the bench.

Combine that with an emotional, nervous game from Dwyane Wade and it's little wonder that the Heat couldn't capitalize on Dirk's shooting struggles on their own home floor. Chris Bosh had an effective, solid game but it wasn't the kind of breakout game that any of the Big 3 are capable of but didn't get in an elimination game.

The Heat's FT shooting, 20-33 (60.6 percent), was astounding as well. The sloppy turnovers, the ill-advised 3-pointers early in the shot clock, the list goes on and on.

The fact that Erik Spoelstra was thoroughly out-coached by Rick Carlisle was arguably just as big of a factor in the series as LeBron's struggles where. Suffice to say, hiring an offensive coordinator-type assistant coach over the summer would be wise.

In the end, the Heat made it to the Finals and took it to six games in their first year together. With so many new players added to the roster, injuries and endless roster tinkering up until the last game, it's quite an accomplishment they went this far. The disappointment isn't that they lost to a great team. It's how they lost in the Finals, how they practically beat themselves with so many stumbles, that frustrates the most. It wasn't the embarrassment suffered by the Lakers as they got swept by the Mavs but it was certainly a letdown after such sparkling performances against the Bulls and Celtics.

Humbled, the Heat must learn from their mistakes and refine what worked. A solid point guard and a center would help matters tremendously.

"There's no hiding in the NBA," Chris Bosh summarized. "You play a series, best of 7 games, usually the better team is going to win. So we have a lot of work to do. We have to go back to the drawing board. It hurts to come this far and come up short.

"It's disappointing but hopefully we can use this for motivation going forward."