Share All sharing options for: Future Bright For Heat

Did the Miami Heat really just make the NBA Finals?

The way some national pundits have spoken, one would think that Miami lost in the first round of the playoffs to the Philadelphia 76ers. 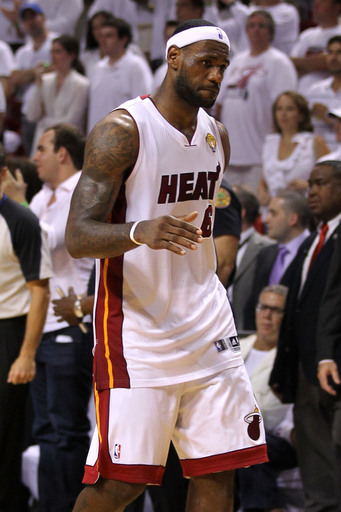 Fox Sports’ Jason Whitlock said that Pat Riley should scrap the Big Three formula. Jeff Van Gundy was not as forceful in his opinion as Whitlock, but suggested that the Heat may have to part ways with either LeBron James or Dwyane Wade.

The Dallas Mavericks earned the NBA championship and played better than the Heat, but Miami was right there. The Heat gave away Game 2 with a 15-point lead with seven minutes left, held a nine-point lead in the fourth quarter of Game 4 and even had a four-point lead in the closing minutes of Game 5. Suggesting that Riley trade either Wade or James after just one season represents how so many people truly live in a world of instant gratification. It would be one of the most reactionary, irrational trades in NBA history.

Both Whitlock and Van Gundy pointed to Dwight Howard as a possible solution. Magic General Manager Otis Smith would only trade James for Howard (Wade is too old), and I would not trade James for anyone based simply off of one series. Miami would not have made it to the Finals without James. He should continue to develop his post game, but he still is arguably the best player on the planet.

This team does not need to make a lot of moves. The Heat already have a championship-caliber core, and one would hope that Udonis Haslem and Mike Miller will be healthy next year. No team in the Eastern Conference stands as a legitimate threat to Miami right now. Chicago and New York are each still a piece away, and the Celtics will continue to age.

No one knows how the impending lockout will affect next season and what new limitations the next collective bargaining agreement will place on teams. But regardless of the salary cap structure, the Heat’s off-season priority should be to sign a serviceable center that can score around the basket. Mario Chalmers played well enough – especially in the Finals – to earn another go-around in Miami. Although James Jones did not play during the Finals due to a foot injury, he played very well in the regular season and deserves another contract with the Heat.

Mike Bibby, Erick Dampier, Zydrunas Ilgauskas and possibly Juwan Howard and Jamaal Magloire may not find themselves wearing Miami jerseys this fall. TNT’s David Aldridge tweeted that lots of players will want to play for the Heat, though. It would help for Riley to fill out his bench with young players who can contribute and reduce the playing time the Big Three rather than simply have a bunch of players on the tail-end of their careers.

People seem to forget that Riley signed James, Wade and Chris Bosh in the primes of their careers to contend for a championship for multiple seasons. All teams – including the Heat – will look to make improvements, but Miami has the nucleus to contend for the foreseeable future. And the Heat will not and should not fire Erik Spoelstra. He handled all of the outside criticism remarkably well and will continue to grow as a coach.

The Heat are now the favorite to win the 2011-12 championship. The future looks very bright for Miami in an Eastern Conference that needs some reloading to challenge the Super Friends. The Heat will be back very soon.