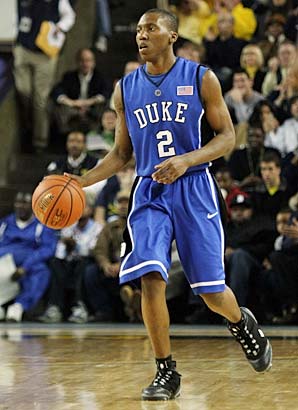 Well, the NBA sure does get right to it, don't they? The NBA Draft is this Thursday, and thanks to the Michael Beasley to T-Wolves trade, the Miami Heat hold the first pick of the second round (#31 overall). The second round of the NBA Draft rarely provides immediate help to a franchise, but it can produce future solid contributors. Many teams choose to dip into the European talent pool in the second round, looking for that "Ginobili Lottery ticket", but the Heat have a track record of not going this route – instead normally going with big school experienced NCAA kids. It's well known that the Heat have two glaring needs - point guard and center. While it would be great to find the next Dwight Howard in the second round, it's much more likely the Heat find a capable point guard at this spot - and that is why I believe Duke PG Nolan Smith would be an ideal selection. Below I will breakdown why I believe his strengths, and weaknesses, would be a perfect fit for this Heat team.

Any player available this late in the draft is bound to have some weaknesses, and Smith is no exception. The good news is his weaknesses, in general, are things he will not be asked to do if selected by the Heat. For example, Nolan is known as a player that struggles to find his own shot, but when given space is a capable shooter – the later being the most important trait the Heat are looking for. If there is one we found out in 2011, this Heat team has no problem creating room for shooters. This is not to say Smith is not a playmaker, as he was averaged over 20 points and 5 assists a game last season for the Blue Devils, and was named the ACC Player of the Year - so the kid isn’t exactly the Joel Anthony of point guards. He shot 35% from three point land last season so with a little NBA coaching he could become a reliable three point threat. His mid range game is considered his strength, especially off the catch and shoot, which fits perfectly with what he would be asked to do in Miami. My favorite part about him is his basketball IQ, and his length on defense – two things that would fit right into the Heat’s system. Nolan is known as one of the college games premier off the ball defenders, willing to put in the work to deny his man the ball. At 6’3’’, he has ample size to match up with most of the games point guards, but may be overmatched against the taller NBA shooting guards. Obviously the Miami Heat have that shooting guard thing pretty figured out, so that’s not a problem.

Playing four years under Coach K at Duke, you have to believe the kid is well ahead of most draftees his age, when it comes to game preparation and practice ethics. Smith has obviously played against top tier talent at Duke, and succeeded (7th all-time on Duke win list). At his core Nolan Smith is a gritty defender, that makes smart decisions with the basketball on the offensive end – value you cant scoff at in the 2nd round.

When researching what scouts had to say about Nolan Smith, the terms "high character", "unselfish", and "cerebral" seemed to come up in almost every review. These things, in my opinion, are very important – because any player that steps onto this Heat team, must be prepared for anything and everything that comes his way. What situation could prepare you more for this firestorm, than having played for Duke for four years? In Nolan Smith, the Miami Heat have a rare chance to add a player with the combination of promising youth AND experience. There is no time for "Dorell Wright Projects" with the current makeup of this Miami team. The time is now, and the foreseeable now. Any draft pick not ready to jump on a moving train, would be best served finding a good European real estate agent.