HHH Roundtable: Who Stays and Who Goes?

Share All sharing options for: HHH Roundtable: Who Stays and Who Goes? 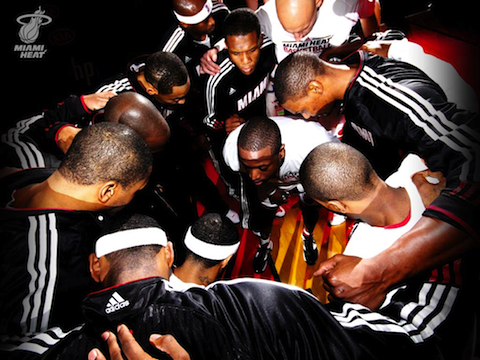 "You become a superstar individually, but you become a champion as a team"


LeBron may have been on to something when he said that. Had the Miami Heat squeezed more out of their roster than they already did, they might have been the champions their first season of playing together. While it's difficult to determine whether the Big 3 can play significantly better next season after doing so much of the heavy lifting this time around, each of their roles on the team going forward now on won't be as much of a question mark as it was when the three signed with Miami last summer. With more time together on the floor (and crossing fingers that Mike Miller arrives in one piece to training camp while Udonis Haslem stays injury-free as he usually has in his career) the team chemistry will be more cohesive over the course of another long regular season.


Yet as good as the Big 3 can be, there's no question that the roster needs more re-tooling. Operating under the salary cap last year, the Heat were able to sign three almost-max contracts but they could not go over the cap. Because of this, the Heat were ultimately in the middle of the pack when it came to league salaries with a collective $67 million, nestled right in front of the Charlotte Bobcats at the #17 spot. (The Dallas Mavs, who supposedly proved that money can't buy a ring like the Heat apparently tried to do for the crime of signing coveted free agents, are second overall right behind the L.A. Lakers with just under $91 million, a difference of $24 million.)


Ongoing negotiations over the CBA between the owners and players could change everything but for now let's operate under the cheery notion that nothing will change and current rules apply. Who should stay and who should go from the 2010-11 Heat roster?


HHH writers Danny Martinez, Diego Quezada and myself gathered around the virtual campfire to speculate on this very question...

The Big 3 aren't going anywhere, yet for some reason it was news yesterday when Pat Riley said as much at his press conference. Udonis Haslem is also a lock to come back. Mike Miller likely stays as well but what if an amnesty clause, similar to one given to teams in 2005 in which a team can jettison a contracted player and avoid paying luxury tax on him, is included as part of the new CBA deal? The Heat may theoretically use that one-time exception on him, though his close ties with Haslem and LeBron James may be a factor. Still, if there's a chance to upgrade in the middle or at PG then Riley wouldn't hesitate to do it. The only other contracted players are Dexter Pittman and Joel Anthony. Both should be back on the roster next season but could be thrown into a deal for upgrades at the above mentioned position. After all, Anthony's play during the postseason likely boosted his value after many people at the time scoffed at the deal that the Heat gave him last summer.

James Jones was having a solid year for the Heat until Miller returned from injury and took his minutes. Would he sign another minimum deal to stay with the Heat and play third fiddle? The reigning three-point champion should find a better deal elsewhere. Eddie House and Zydrunas Ilgauskas have player options for next season, but House will likely be the only one to actually exercise it. Jamaal Magloire, Erick Dampier and Juwan Howard were used sparingly by the end of the season, with only Howard getting any decent minutes in the playoffs, and all likely will either retire or play somewhere else (overseas?). Same goes for Mike Bibby, send him to the glue factory already.

Mario Chalmers, like Anthony, boosted his value to the league tremendously with a gutsy Finals performance and may get a nice offer somewhere else. Riley won't hesitate to upgrade at that position but Chalmers would be handy off the bench regardless if he doesn't start. He will be the biggest question mark this offseason, but you'll take that in a heartbeat after remembering Wade was that big question mark last summer in an offseason of uncertainty. Compared to this one, Heat fans should rest easy that Riley is on the case to make the team stronger to get that necessary support system in place for the Big 3.

To me there are eight players that I think are "locks" to return. They are LeBron James, Dwyane Wade, Chris Bosh, Udonis Haslem, Mike Miller, Mario Chalmers, Joel Anthony and Dexter Pittman. The first three would be kept for obvious reasons, namely: they're better than just about anyone at their respective positions. The second three? Well, it's a little more complicated. Udonis Haslem will return because he's a valuable reserve power forward and will retire a member of the Miami Heat. Mike Miller was hampered by injuries all season long, and as such never found his shooting groove. Heat fans have to hope that his thumbs (and ankles and knees and shoulders) heal in time for next season. The Heat would probably prefer to get out from under his cumbersome contract, but his value is at an all-time low right now. As for Mario Chalmers, he stays because the point guard market is unbelievably thin. Chalmers played well in the playoffs, and extremely well in the Finals. Yes, he makes dumb plays and is extremely inconsistant, but he's the best option available. Also, LeBron is very fond of him, something that has to help his chances. The Warden proved his value during the postseason run this year. Hopefully next season he can return to his role as backup center. Sexy Dexy will be around and will be expected to contribute some, but how much is yet to be determined.

This is a category for James Jones. His shooting this past season may have earned him a contract greater than league minimum, which is probably all the Heat will be able to offer. If he takes a hometown discount, he'll be playing in Miami next season.


Staying, but not by choice:

Eddie House. He's signed through next season, so he'll be here. I do think Eddie has some value, but I don't think the Heat would bring him back if they didn't have to.

All of the old guys. Mike Bibby, Erick Dampier and Big Z will almost assuredly not be back. I don't think Juwan Howard or Jamal Magloire will be back, but they're much more likely than the other three. All of these players provided something for the Heat at one time or another, but none can be relied on to contribute regularly. If the Heat have a hard time filling out the roster, I wouldn't be surprised to see Howard and the Big Cat sitting at the end of the bench in their neatly pressed suits. I'd prefer the Heat to sign younger players that have the ability to improve rather than give spots to players on their last legs.

Dwyane Wade, LeBron James and Chris Bosh - I am utterly baffled that some people seriously think that the Heat should pull the plug on the Big Three. This year was their first season together and they made it to the Finals. No would disagree with the fact that Wade and James are similar players or that they all should add to their repertoire this summer, but this blueprint isn't a failure based off of one year.

Udonis Haslem - After an injury-plagued season, Haslem should take on his role as one of the better backup power forwards in the NBA. Like he did at the beginning of the year and in the final two rounds of the playoffs, he will play significant minutes with Bosh.

Mike Miller - He will have surgery this off-season so he can return fully healthy next year. Ideally, Miller is a guy who can come off the bench, play big minutes and offer some shooting and rebounding.

Joel Anthony - Miami will look to try to upgrade at the center position, but Anthony can still offer shot-blocking and energy off the bench.

Mario Chalmers - The Heat extended a qualifying offer to the three-year guard out of Kansas, making him a restricted free agent. He provided Erik Spoelstra with some headaches over the course of his NBA career, but played well in the Finals and earned his starting job back. Riley will try to re-sign him.

Dexter Pittman - The Heat rookie center figures to be in Miami's long-term plans, and may even have a shot to contribute if he doesn't see a few over-the-fill centers in front of him on the depth chart.

Eddie House - The sharpshooter has a player option for next season and will probably opt in considering the uncertainty about next season with the impending lockout.

James Jones - Like House, Jones has a player option for next year. Although he did not play in the Finals, Jones could still have a role on this team next year. He contributed when Mike Miller injured his thumb and probably wants to continue playing for his hometown team.

Jamaal Magloire - The lumbering center has some friends in the locker room. He may return as a third-string center, but may find himself off the team if Riley chooses to make his bench younger.

Juwan Howard - Howard wants to continue playing, and Riley may keep him as a positive influence in the locker-room. Ideally, he is a third-string power forward behind Bosh and Haslem.

Mike Bibby - Bibby gave up his entire salary for 2011-12 to join a championship-contending team, but had a dismal run through the playoffs.

Erick Dampier - The guy played zero minutes during the playoffs and may have even partied with the Mavs. Is this really a discussion?