Big Z wants his last paycheck and thanks to the contract he signed last summer, he's guaranteed it now by invoking his player option of $1.4 million for the 2011-12 NBA season (lockout permitting).

No roster spot is assured but the 36-year-old Big Z could prove useful in limited minutes if he lasts through training camp and makes the final roster. After taking the starting job over from Joel Anthony early in the season, Ilgauskas began losing form in the second half of the season and was replaced by Erick Dampier in the starting lineup. He again lost the starting spot to Anthony during the Eastern Conference Finals against the Boston Celtics and was inactive for the NBA Finals.

His best moments on the floor in his first season with the Heat, only his second NBA team after playing his entire career with the Cleveland Cavaliers, came about when his midrange jumper was reliable while working in tandem with LeBron James on pick and pop plays. His length was also effective in grabbing offensive rebounds with the defense focused so much on the Big 3.

Also today, Chet Kammerer, Heat VP of Player Personnel, discussed tomorrow's NBA Draft and the Heat's lone pick at #31 with the media at the AAA. Here is a transcript of a few questions that were asked, courtesy of the Heat's Facebook page: 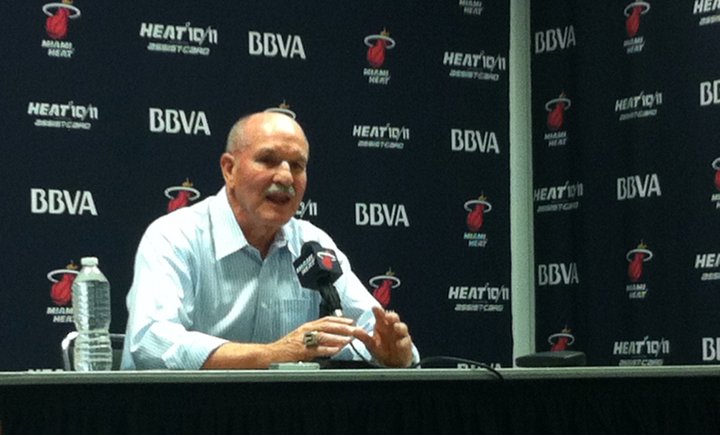 We have had 7 workouts, 6 guys in each workout. Even though we were busy in the playoffs, we have been busy in the background trying to look at players. You have to go with who you think are the best players. We brought in a lot of players, in a lot of different positions trying to get a feel of what will go on tomorrow night.

I think it is one of the more unusual, intriguing drafts in the last few years. I say that because there are a lot of subplots.

I think there is an unbelievable amount of parity in this draft. I think if you are picking 6 or 16, I'm not sure there is much difference.

If you ask me to pick out two positions in this draft, I would say point guards and power forwards.

On his goal for the draft

What I look for in the draft is trying to add a piece to the nucleus that we have, that is different than what we presently have on our roster. Adding a dimension of a player that brings us something that we don't have presently.

I think to have an enthusiastic, young talent would be good for us on our roster next year. It's our job to find that right blend, the right person to fit that role.

On one of last year's 2nd Round picks Jarvis Varnado

We are going to continue to work with him. He had a nice year, he ended up breaking the Italian League record for blocked shots. We put him over there to work on improving his ability to score the ball. He has improved, he is more confident offensively than he was.