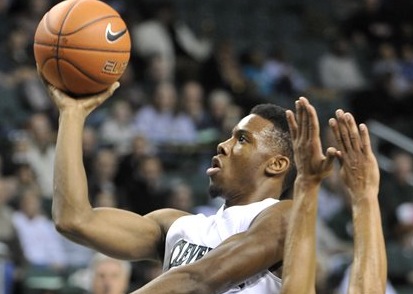 Although the saying goes ‘In Pat We Trust', you cant always take what he says too seriously.  After saying earlier this week that it was unlikely the Heat would trade into the 1st round, they did just that last night.  When the dust settled, Miami ended up with point guard Norris Cole from Cleveland State, who was taken with the 28th overall pick by Chicago.

Here is the sequence of events that ended with Cole coming to the Heat.  He was drafted by Chicago at 28, and then the Bulls traded him to Minnesota.  The Timberwolves then turned around and shipped him to Miami in exchange for the 31st pick, a future 2nd round pick, and cash.  The funny thing is that the Heat originally held the 28th pick but shipped it to Toronto last summer in the Chris Bosh deal.  The Raptors then traded it to Chicago mid-way through this past season.

In Cole, Miami gets a 6'2" ‘true' point guard who has an improving shot, is a proven scorer and plays solid defense.  Last season while playing for Cleveland State Cole averaged 21.7 points on 43.9% shooting, though he only shot 34.2% from downtown (and that's college 3-pointers, not NBA, which is 3 feet farther away).

One of the things I really like about Cole is his ability to get to the foul line.  Someone who isn't afraid to drive the lane and create for himself can be a real asset with guys like LeBron and D-Wade out there attracting defenders.  All in all, his offensive skills are what you would want for the Heat, and considering the late 1st round spot, the value is great.

What I feel is probably the best attribute about Cole is his defensive ability.  The kid is not only a solid, speedy defender with quick feet, but he appears to genuinely enjoy playing on that end of the court.  I remember thinking that to myself when seeing him play at the AAA during the first two rounds of the NCAA Tournament back in 2009, though I didn't actually remember until referencing my notes.

He really stood out in Cleveland State's 1st round upset of Wake Forrest when he put up 22 points.  Beyond scoring, defense at the point was lacking for the Heat last season and would be a welcomed and necessary change for a team with only a few holes.  As for the other point guards in the draft that I thought might be available for Miami, Duke's Nolan Smith and Boston College's Reggie Jackson went to Portland and Oklahoma City respectively.