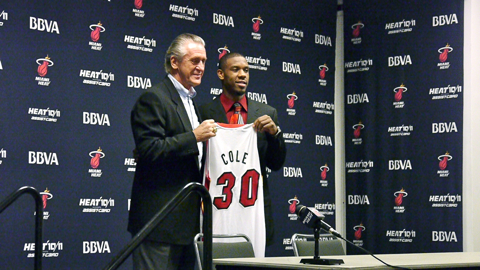 Miami Heat president Pat Riley officially welcomed draft pick Norris Cole to the franchise today with an introductory press conference and jersey presentation. Riley joked to Cole that the media always accuse him of never playing rookies but he seemed sincere when he said that his new rookie would have the opportunity to earn minutes. With his family looking on, Cole was a bit nervous but said all the right things and seemed more than ready to get out on the floor and work with his new teammates. Unfortunately, thanks to the impending lockout we won't know when that day will actually happen.

Cole will now wear the #30, which has been available since the Heat's last first-round pick Michael Beasley was traded last year to the Minnesota Timberwolves.

Check out the video after the jump of the entire Cole press conference...

Here's a transcript of a few of the questions and answers today courtesy of the Miami Heat's Facebook page...

We feel very good about his skill set and what he can bring to our team. He has parroted all the words that we like to hear from a young player, "hard work", "just getting better" and "coming to play every single day." We can't wait to get started working with him.

I was at my house in Dayton, with my family all gathered around watching TV. I got the call from my agent. Everyone heard my name called and went crazy. The house started shaking. There were 80 people at the house.

On controlling the offensive pace

On playing with LeBron and Dwyane

I am just coming in to get better. [When] I come in, I am going to work. When we get into practice, I am going to compete. I am content playing my role on this team.

On his summer plans