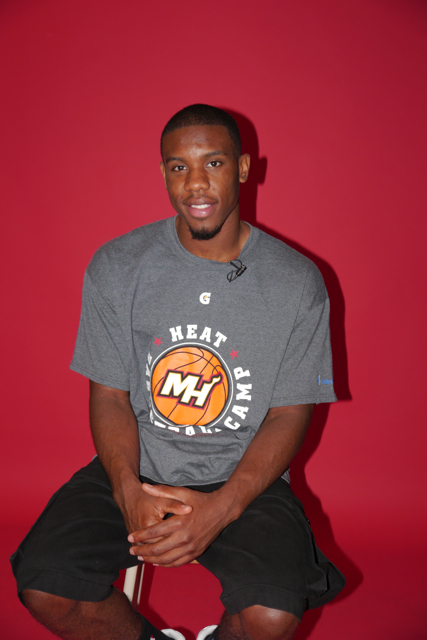 One week ago, Norris Cole was a relatively unknown college prospect out of Cleveland State. Now he's a first round draft pick ready to prove to the world he belongs on the same court as LeBron James, Dwyane Wade and Chris Bosh. Cole showed up to the team's Heat Camp for kids at South Broward High School in Hollywood, FL to sign autographs and take pictures with the participants. With a broad smile and easygoing attitude, it's easy to forget just how far he's come in the last several days.

"It's starting to set in," he said during a break from meeting with the approximately 191 kids at the camp. "I'm still excited but I know at the same time I have a job to do. I have an organization to represent now and I have my family to represent so I'm taking it all in stride."

He's also getting to know his new surroundings. "The Midwest is a lot different than down South," he said. "The palm trees, the humidity (laughing). The atmosphere is great, I love it.

"I haven't really been anywhere in Miami except from the hotel to the gym but I'm pretty sure I'll learn my way around and learn where to be and where not to be."

As for any pressure about currently being the only point guard on the roster with Mario Chalmers and Mike Bibby on their way to free agency, the rookie didn't seem to be too worried about the challenge ahead.

"No, I don't feel any added pressure," he replied. "I'm just going to come in, work hard and compete for a spot on the team. Whatever happens after that just happens.

"I feel like I have a lot to prove anyway. I play with a chip on my shoulder but I don't really pay attention to what the outsiders say. Like I said, I'm going to work hard, earn the respect from the team here and try to help us get over that hump."

With the lockout looming, no one knows for sure when that will actually happen but when it does, Cole will be looking forward to playing alongside the Big 3.

"I'm going to work hard and earn the respect of those guys so they know they can trust me out there on the court and just be myself," he explained. "I'm a hard worker, I play defense. I'm a natural point guard so I know how to get those guys the ball. Once I learn what spots they like to get the ball in, I'll do that for them."

I then asked him what it was about his game that made the coaching staff take notice of him during predraft workouts, for the benefit of those of us not familiar with his exploits in Cleveland State.

"Well my speed is what the coaching staff liked. Being able to go end-to-end with the ball and make plays, defend the ball and I'm going to do that. I'm going to make sure I put myself and put the team in a situation where we can run and where we can be effective but yet still defend because that's what this team is about. Playing defense, getting out in transition and getting those three guys the ball."

Once the Heat took a liking to him, they did their due diligence in finding out more about the young man from Dayton, Ohio. I was curious how much scouting they did of him on and off the court.

"(It was) a little bit of both, they had known all about me. They do their homework real well during the pre-draft process. They talked to everyone around you. People you wouldn't think they would talk to, they talked to. So they knew who I was as a person."

I then asked him how surprised he was when the Heat took him and Cole told me his agent called him a couple of picks before to let him know the Heat would be taking him. When the moment finally happened (regardless of the spoiler alert), it was the fulfillment of a lifelong dream.

"Well, it's like a relief," he explained. "You worked hard in the pre-draft period and you want to hear your name get called on draft day. For that to happen it was a dream come true."

Heat president Pat Riley made sure to feel him welcome after he was drafted.

"He's a legend knowing this game of basketball. When he called and said, 'Welcome to the family', it felt great. It's just like at home when you have your father and mother say (that). He's the head of the organization and for him to say that it was great."