With the NBA likely to impose a lockout July 1, Pat Riley set up a free agent minicamp to see who could potentially fill out the Miami Heat roster. The NBA has already cancelled the summer league, which hurts Heat first-round pick Norris Cole from beginning to develop with the team coaching staff. 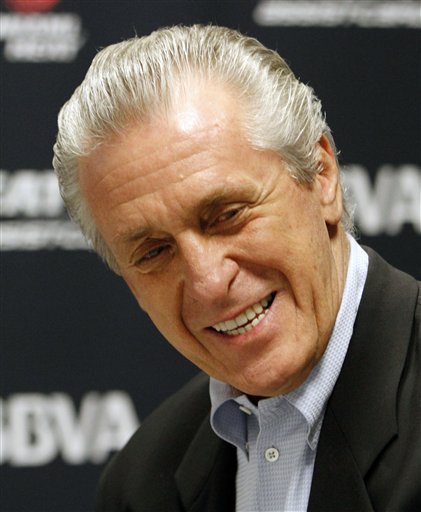 Cole has participated in the minicamp, which will probably have to end June 30, when the current collective bargaining agreement expires, though. Riley also invited 2010 Heat second-round pick Jarvis Varnado to the camp. Varnado spent this past season in Italy and could find himself on the team roster as the Heat’s third power forward, assuming Juwan Howard doesn’t return. Varnado could fill in Riley’s desire to have "young and energetic" players next year. Other players at the camp include Chaisson Allen, Papa Dia, Marquez Haynes, Matt Janning, Greg Smith and Julyan Stone.

But Eddy Curry is the most noticeable name of the bunch. Riley previously saw Curry work out in Chicago with renowned trainer Tim Grover in April, but opted not to sign the burly center for the 2011 playoffs. Curry was said to weigh more than 350 pounds just before the playoffs, and his battles with weight and personal issues have led him to only play in 10 games over the past three years.

I’m inclined to believe that Curry merely represents a back-up plan if the Heat strike out on signing a center like Samuel Dalembert in free agency (at least I hope so). Even when he played his best basketball, Curry was a sub-par rebounder and did not block shots. The most rebounds the 7-footer has managed to grab on average in one season? Seven. Although Curry could score in the post when he could play, he simply does not provide enough in other areas.

Ira Winderman of the South Florida Sun-Sentinel reported that Curry has worked against Dexter Pittman recently, providing the Heat with some degree of comparison, however. NBA rules forbid teams from working out players who ended the season on an NBA team, like Pittman.

The Heat already have LeBron James, Chris Bosh, Dwyane Wade, Mike Miller, Udonis Haslem, Joel Anthony, Zydrunas Ilgauskas and Pittman under contract for next year. Miami also retains the draft rights to Norris Cole and the right to match any offer Mario Chalmers receives in free agency. That makes up 10 roster spots, and the team limit stands at 15. Eddie House has a player option for next year, so that number could increase to 11. Several players from the minicamp may receive training camp invites, but perhaps only one could make the opening night roster. Riley will look to sign veteran free agents once the lockout ends.