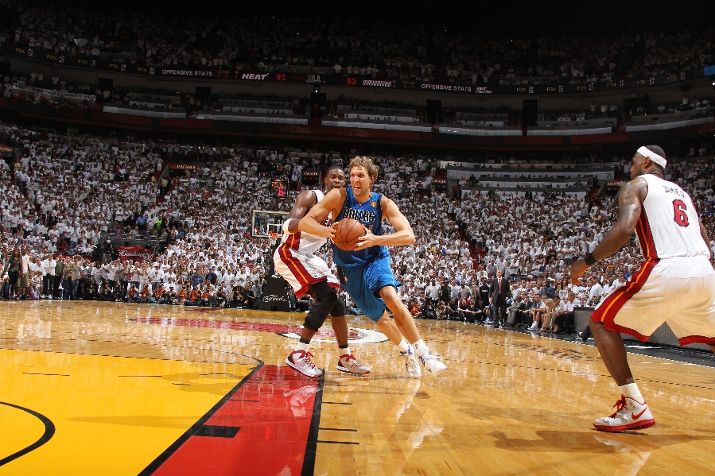 With just 7 minutes left in the final quarter, Dwyane Wade swished another three-pointer right in front of the Mavs bench to make it a 15 point lead at 88-73. The series appeared set to go 2-0 heading to Dallas.


The Mavs were a mess on offense. They didn't score their third and fourth points of the final quarter until the midway point with a Jason Terry jumper. He then followed that with a breakaway layup in transition to cut the lead to 88-77. Spoelstra called a quick timeout and assuredly this was going to be the time of the game where LeBron and Wade would take over and lead the team to victory, as they had done in every other home game this postseason.


A devastating 22-5 run over the final six minutes of the game sealed yet another comeback win for the Mavs. The Heat's offense stagnated in the worse way, with zero off-the-ball movement and ill-advised 3-point attempts from LeBron and Wade.


"We're not happy about this," said Heat coach Erik Spoelstra. "Certainly the way we closed the game is so uncharacteristic for us on both ends of the court. Really I think offensively if we could have executed and move the ball we might have been able to stem the tide a little bit even as poor as we were defensively down the stretch."


At one point in the third quarter, Mike Bibby had surpassed Dirk's point total while Tyson Chandler had matched it, taking just a third of Dirk's shot attempts to reach it. For a while there it really seemed like that finger in his left hand was bothering him. That was before crunch time though, when everything went right for the Mavs and the Heat just couldn't stop the bleeding with mistake after mistake.


It wasn't just the players either. Spoelstra used up all of his timeouts to try to stop the Mavs momentum and assigned Chris Bosh to cover Dirk on the last play, the one in which the Heat had a foul to give but allowed the Mavs star forward to drive to the hoop anyway.


"We knew coming out that we had a foul to give and we had no timeouts," claimed Wade. "It's a mental breakdown on us, we'll take it."

Sitting next to him, LeBron had no excuses either to account for the Heat's poor play in crunch time, the first instance of anything resembling a letdown at that time of the game in this postseason.


"Offensively, we've been out of rhythm before," LeBron pointed out. "At the end of the day we hang our hats on our defense. Defensively we just have to be more in tune and not allow a great offensive team to get as many great looks that they did down the stretch."


As for that "celebration" in front of the Mavs bench after a Wade triple that Dallas reporters so clearly wanted to assign as the reason why the Mavs overtook the game afterwards?


"Every team in the league when they go on a run they do something," said Wade after yet another question about it. "Whether it's a signal, whether it's a chest bump, it's part of the game of basketball. A celebration is confetti. A celebration is champagne bottles. There was no celebration. It was a shot made and going into a timeout, every team does something. It's just being excited about the moment."


That's great for a dramatic narrative in an article about how the Heat's arrogance blew up in their face. But back in reality, Mavs coach Rick Carlisle explained the real reasons why the Mavs got back into the game in such a hurry:


"By being solid and getting a couple of stops and then scoring, we got some momentum. It worked out. If we were able to do that in a championship series, you got to have some good fortune along with playing hard and giving yourself a chance. I thought we missed a lot of good shots again but we were due to get on a roll if we could get some stops. And we were able to do that."


Dirk was clearly fired up during that run so he must have been greatly offended by Wade and LeBron's antics.


"I didn't even see it that much, to be honest," Nowitzki said. "Probably our other players saw it. I kind of had my head down."


Now it's the Heat's turn to strike back on the road. Victories in Boston and Chicago have proved that though the task at hand is difficult, it's not impossible for a team with 3 stars. While many predicted the Heat would outlast the Mavs, no one predicted a sweep either. Just grabbing one road win in three tries would give the Heat the chance to finish off the series back home.


"When it started to slide, it just kept on going," said Heat coach Erik Spoelstra. "But we've been a very resilient group all season long. We've been tested. We've had our moments where we feel like our backs are against the wall. That's when we've responded and been our best.


We have a lot of guys who have some character and toughness to be able to respond to a game like this."