The Dallas Mavericks took care of business during the first two games of the NBA Finals, leaving South Florida with a split and now heading home to host the next three games against the Miami Heat.  Dallas' 2-game split is even more impressive when you factor in that they lost the first game and had to come back from a 15-point deficit in the final minutes of Game 2.

Most of the time you would be hoping that the Heat could do the same thing that their opponent did, leaving town with a split and re-gaining home court advantage, but that isn't possible in the Finals.  Why?  Because for some reason the NBA still uses the 2-3-2 schedule in the final round.  I don't know one person that prefers that to the 2-2-1-1-1 setup that is used during the first three rounds, but who knows if the league will ever wise up and get with the times.

So with that being the case, Miami now will try to get out of Texas with a pair of wins, otherwise they will come with a very difficult task in front of them.  Either way, assuming neither team sweeps the 3 games in Dallas, someone will be returning to South Beach with an opportunity to end the series and become champions next Sunday night at the AAA.

For now the focus is on Game 3, which takes place tonight at the American Airlines Center in Dallas, the same place that the Heat celebrated their 2006 NBA championship.  They hit the road with what I'm sure is a very intense mindset after the way the last game ended.  Miami has shown that they can control the game against the Mavs so hopefully Erik Spoelstra and his staff will make the proper adjustments to continue their solid play against the double screen's and smaller lineups that caught them off guard at the end of Game 2.

Tipoff from the American Airlines Center is set for 8 o'clock.  There is going to be a massive watch party inside the AAA here in Miami hosted by the Heat.  They made 12,000 free tickets available on a first-come first-served basis on their website, but they are now all gone.  If you are attending, parking will be made available in the P2 garage for $5, and the first 2,000 fans will receive free t-shirt.

On a side note, both Dwyane Wade and LeBron James will be wearing new colorways on their particular shoes.  Wade wears the ‘Jordan Fly Wade's' and LeBron sports the ‘LeBron 8 PS'.   These new color schemes are special for the NBA Finals and the Wade's wont be available at retail, but the LeBron's will be in a limited capacity.  Check out the photos of the new colors below.  Lets Go Heat! 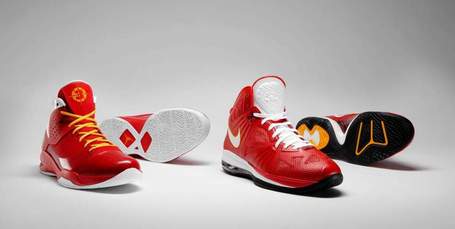