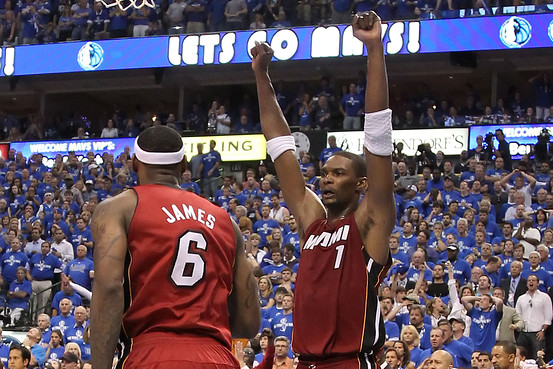 Finally, I'd like to address the nonsense spewing out of the mouths of Jason Terry and DeShawn Stevenson. I'm not a huge believer in "bulletin board material," but if it does exist, these two Mavericks sure are providing it. Jason Terry doesn't think LeBron James can cover him in the fourth quarter for seven games. Terry must not be too good at math, because this series isn't best of 13, and James has already shut him down multiple times. Terry is 0-5 against LeBron in fourth quarters in the Finals, so poking the bear may not be the best idea. Jason Terry has also made it a point to belittle Chris Bosh's game winning shot, which is cute. There was no "blown coverage" as Terry suggests. It was a brilliantly designed set that took advantage of the attention a James-Wade pick and roll demands. Him saying that "even Juwan Howard can hit that shot" is just petty and uncalled for. My favorite Terry sound bite was his insistance that Portland was the best defense the Mavs have faced in the postseason. The Heat were the fifth best defense in the regular season. Portland? The 14th. The Heat have had the third best defense in this postseason. Portland? The 15th. Go away, Jason Terry. DeShawn Stevenson's bit about the Heat being "actors" is pretty hilarious as well. The man with neck tattoos, a "three monacle" and a -17 +/- in the NBA Finals should probably just keep his mouth shut. Besides, we already know the Heat are "Hollywood as Hell."