The Simplification of Teamwork and Isolation

Share All sharing options for: The Simplification of Teamwork and Isolation

The most grandiose superstars in the game are asked to produce offense with their elite set of skills, yet none are as disparaged as the boys in Miami today. In Cleveland, James was largely the main source of offense much like Wade in the post-Shaq era, but neither was chided for their dominance with the ball due to the lack of help surrounding them.

The luxury of having both of them team up now provokes criticism from the media due to the indulgence in isolation play and "hero" ball (myself included). But is it a fair assessment or is it merely our natural visionary prognosis due to the magnetism of these superstars?

Not focusing on the Miami duo’s isolation play is hard, but aren’t Dirk Nowitzki, Jason Terry and Shawn Marion basically doing the same? Dirk is often isolated, Terry has a quick trigger in transition and can create his own shot, and Marion depends on his inelegant style of play in the post to make baskets that look like they have no chance of going in, but do.

Watching this "team ball" versus "talent ball" Finals have inspired me to look deeper and in the process found the gift of simplicity.

Statistics can now tell us what type of possessions a team uses throughout the game, how successful they are and how often they’re used, but it never determines if it was simply considered a “good” or “bad” basketball possession.  There aren't any numbers tallied for this.

Say a possession ended up in a miss, but was it from a player taking a rushed, low percentage shot or was a play gracefully executed resulting in an open shooter who shoots well from that spot on the floor but missed?  Wouldn’t the ideal goal be to have a team end up taking more teamworked, high percentage shots than low?

In questioning this basic principle I decided to take a look at every possession from both teams in Game 3, simplifying possessions into a high percentage or low percentage shot and splitting the makes and misses.  Now, judgment would be best left to the most elite of analytical experts, coaches, or a mixture of both but assume I can decently tell how a play materialized.  I’d like to think logging thousands of games in my brain while naturally focusing my mechanically-oriented brain to the X and Os of it all gives me enough credit to diverge plays, much like most hardcore basketball fans can as well.

The criteria used is actually simple.

High Percentage Field Goal Made/Miss:
- Taking advantage of double team, whether drawn by a player on the move or isolated anywhere on the court.
o Example: James isolation at the top of the key draws defender leaving corner 3 open.
- Any productive ball movement leading to a high percentage shot.
o Example: James drives along the baseline, makes the cross court pass under the basket to a corner shooter who then rotates the ball to a more open shooter at the top of the key.
- Product of screen/pick either on-ball or off.
o Examples: Wade mid-range bank shot off a curl. Well executed pick-and-roll.
- Draw foul from: mismatch, ball movement leaving defender out of place, or reward for aggressiveness.
o Examples: Bosh posts up on smaller defender. Double team leaves big wide open under the basket who is then fouled. Player drives into the paint instead of settling for step-back jumper.

Low Percentage Field Goal Made/Miss:
- Post-up too far away from the basket.
o Example: Bosh setup in isolation near the corner 3.
- Rushed shot.
o Example: Chalmers takes contested shot early in the shot clock.
- Holding on to the ball too long, resulting in complete isolation.
- Shot from farther than player is capable of making at an average rate.
- Contested shot while having other more obvious, higher percentage options.
- Basically anything opposite of a high percentage shot.

Not Applicable Possession, FGM/Miss:
- Off-the-ball or inadvertent foul.
o Example: Hack-a-Shaq off the ball, team over the limit.
- Buzz beating heave whether successful or not.
o Example: Full court buzzer beater.
- Basket off lucky, unlikely bounce leading to an easy score. No possibility of defensive rebound even if perfectly situated.
o Jump shot ricochets off the back of the rim, takes long bounce out to open shooter.
- Any turnover whether from a travel, bad pass, or loose ball foul.
- Tip-ins or putbacks (Yes, important but we're focusing on team play and shot selection).

Not looking at anything else while jotting down the classification of every play, this is what came of it: 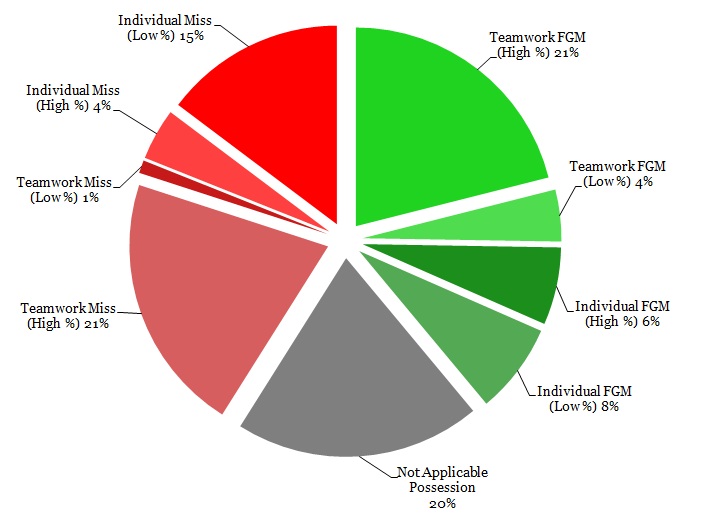 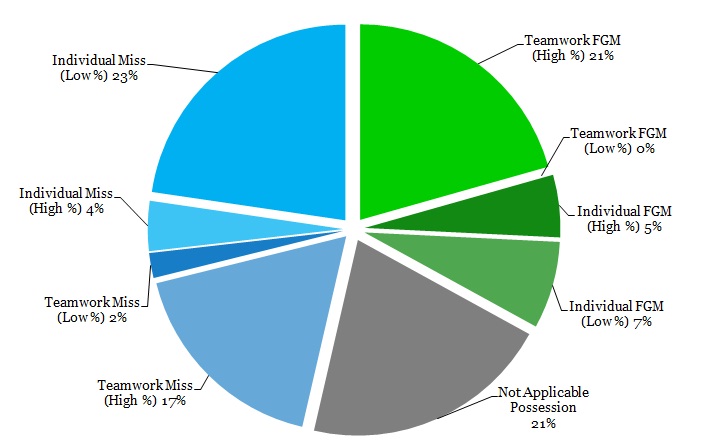 The basic premise above is both teams take just about an equal amount of high percentage and low percentage shots.  Isolation was actually slightly more prominent from Dallas, often times recoursing to a desperation shot due to their deficit of solid playmakers aside from Dirk.  Miami missed a few more open looks but converted isolated, low percentage shots at a higher rate. Miami won 88-86. Such is the luxury of Dwyane Tyrone Wade and LeBron Raymone James.

One game is only a small sample size for any fact to be definitive, but more and more does it seem the predisposed notion of isolation ball in Miami might be merely a product of the target on their backs. Unorganized isolation play at the end of games is still very debatable, but that's another sub-chapter in the story.  Miami plays team basketball, and the hope is for it to remain so at the end of games as not to give up 15 and 9 point leads in the 4th quarter.  Game 5 would be a good start.