Share All sharing options for: Dwyane Wade Looks Back on NBA Finals

Dwyane Wade is holding his All-Star Basketball Camp at Nova Southeastern University from July 12 through July 14, which gave the local media a chance to catch up with the Miami Heat guard, a rare opportunity during the long summer and an offseason that may not end as soon as all of us would like.

The camp is sold out (along with over 300 on a waiting list this year) with 475 boys and girls able to participate in various stations that specialize in the fundamentals of the game of basketball. The camp this year also features the inaugural D. Wade Cheer & Dance Camp that is hosted by Katina Taylor, wife of NFL All-Pro Jason Taylor and sister of Miami Dolphin legend Zach Thomas. 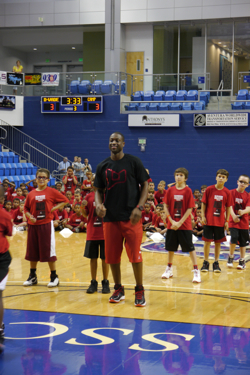 "We’re here to not only teach kids about basketball but we’re here to teach them skills in life," Wade said after he met with the kids and played a bit with them. "If I can leave my mark in the world that way, as I do in my foundation, then I feel like I’ve done my job. So when I get to 60, 70, 80 years old I can sit back and I can be happy with what I’ve done."

After talking about the camp some more, Wade was asked about the NBA Finals and how he's been coping since then.

"The sting is always going to be there when you lose," he said. "Obviously, it was my first time ever losing in the Finals. The sting is there, no question about it. I joked with the kids. I said, 'All right, I'm going to make jokes about it. You guys are not going to ask me the question.' Because the first thing, when they ask questions, they want to know stuff. I make sure I shed some light on it in a "sense-of-humor" type of way, but the sting is there but you've got to move on. As I said at the end of the year, we learn from it, but life continues to go on and we'll have a lot more basketball left in our lives to play and we'll get another crack at it."

As for the criticism that came the Heat's way because they didn't win it all in their first year, Wade wants nothing to do with that.

"We understand that it’s a failure, it was a failure for every team that didn't win besides the Dallas Mavericks. They were the champions so they had the best year. Everyone else failed - you didn't win a championship. But the things we did just didn’t (get) erased. So we understand that what we did the first year as a team, we had a good year, we had a darned good year, and if we'd have won the championship, it would have been a pretty amazing year.

But Wade is clearly still in recovery mode, as he's stayed away from a certain sports network since the NBA Finals. This revelation came out when he asked if he was following the Women’s FIFA World Cup.

"Is it on ESPN? I haven't watched ESPN in a long time. Sorry ESPN. I love the network and all but it's still hard to watch basketball."

Even though the kids at the camp asked him questions about the Finals, none of them asked about the current NBA lockout (did they fear getting fined by David Stern?). But they certainly had other questions for Wade.

"They asked me if LeBron was too selfish, they asked me about basketball, someone asked about my girlfriend. It was all kind of questions but no lockout questions at all. So I think it’s sensitive to them so they stay away from it (laughs)."