Ever Wondered Why NBA Players Wear Beats By Dr. Dre?

Share All sharing options for: Ever Wondered Why NBA Players Wear Beats By Dr. Dre? 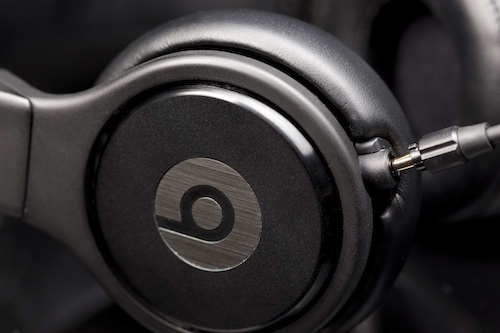 It's an inevitable image at the beginning of every NBA telecast: the NBA player wearing Beats By Dr. Dre as they get off their team bus looking quite serious and very focused on the task at hand.

You can thank Maverick Carter, LeBron’s business manager, for that.

As told by Carter to Jason Whitlock, this trend can be traced directly to a meeting he had with music industry giant Jimmy Iovine, who had recently co-created the "Beats By Dr. Dre" product line along with the legendary hip-hop artist.

“I got this whole thing about gift-giving and how to use it as a marketing tool,” Carter continues. “Jimmy is telling me about Beats, the headphones by Dr. Dre . . . So Jimmy has me put on a pair of Beats. I love them! The sound is great. They look hip.

Iovine obliges. Carter gives the headphones to James, instructs the two-time NBA MVP to gift them to his 2008 Olympic teammates as they board their flight to China. As he presents the headphones, James shares a short speech that touches on the significance of their journey and how the Beats symbolize the sincerity of their commitment to put team goals ahead of individual ones.

When the Redeem Team deplaned in Beijing, the international press awaited LeBron, Kobe, D-Wade, ’Melo and D12. A paparazzi-like contingent of still and television cameras captured their arrival. Fifteen new pairs of Beats draped the heads and necks of the world’s most recognizable athletes as they conducted their initial, impromptu Olympic interviews.

“Maverick gets it, and he gets it done,” Jimmy Iovine blurts out while retelling the story Carter shared in the Mercedes. “Maverick says it, and it happens. And that’s rare in any business.”

Iovine would later serve as co-producer of the LeBron James documentary More Than A Game in 2009 along with Carter and James. The Heat superstar is also now the only athlete with his own signature model of Beats called PowerBeats, earphones with superior sound but designed for an athletic lifestyle.

We can clearly see these headphones are the coolest around, but do they sound as good as they look? I had always wondered this but walking into the Heat locker room and asking LeBron if he could lend me his wasn’t an option.

Luckily, I was invited last month for a sneak preview of the new limited edition “Miami Beats” up at the penthouse of the SoHo Beach House. This particular colorway was actually designed by Carter along with Dr. Dre. and considering how much he had to do with their success I’d say it was a long time coming. 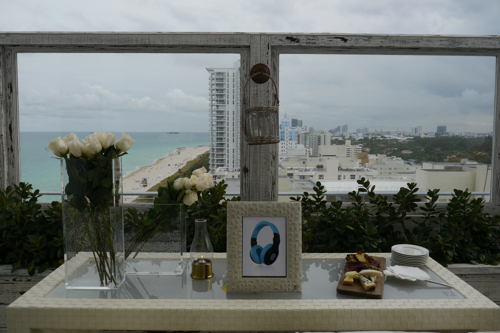 Hanging out and rubbing shoulders with Carter and friends was cool enough but between sips of 2002 Dom Perignon and nibbling fine cheese, I finally spotted a trio of models who were happy to share the experience of listening to music through these lovely headphones. In a separate suite below, there was an open bar next to a Beatbox pumping out Drake. Nice. 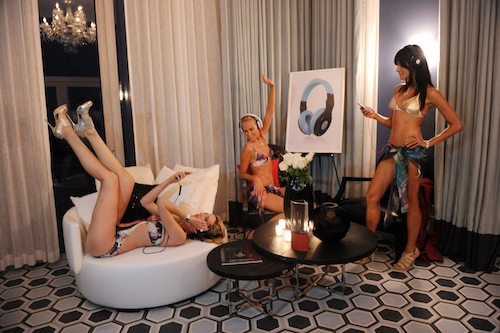 Not only did I have a great time at the party, they were kind enough to later send me a pair of their other limited edition Beats on the market right now, the deluxe Beats Detox Pro, their most luxurious model to date with brushed black aluminum replacing the glossy plastic of the original. Made to commemorate Dr. Dre’s newest album, they were styled by the man himself to combine sophisticated construction and advanced sonic technologies to deliver the power, extra durability and comfort that is craved by those committed to the pursuit of audio perfection. And I was pursuing these for a while now.

When I finally was able to sit down in a quiet room and experience them, the effect it had on the very same music I had heard already thousands of times over was like that of a ghost town lit up by a nuclear (sonic?) explosion. 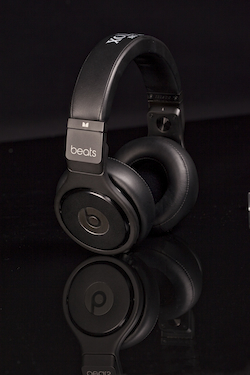 The clarity was almost distracting. Having long been used to hearing music with the stock white ear buds that come with the iPhone, I couldn’t get over just how dynamic everything was. Almost to a fault a few times, when I noticed the slight clipping between loops of the opening guitar to Eminem’s “Lose Yourself”. Actually, I didn’t even realize that it was a loop until I heard them with Beats. Of course I had to go through my hip-hop tracks first, new and old. De La Soul, Wu-Tang Clan, Jay-Z, Beastie Boys, Cypress Hill, Gang Starr: all of it sounded impeccable, with just the right amount of bass without overpowering everything else.

But I already knew they would sound incredible with hip-hop. I was most interested in hearing other genres of music (especially if they were recorded with analog equipment) and I wasn’t disappointed. From 1980’s Japanese electronic music (Yellow Magic Orchestra) to 1880’s Russian classical music (Pyotr Ilyich Tchaikovsky) and everything and everywhere in between, these cans instantly remastered every note before it reached my eardrums. And it was awesome.

After getting used to these, all my other headphones are pretty much worthless and now sound as much. I'm listening to them even now as I type this.


Only by using them did I realize one other possible reason why NBA players love Beats so much, they fit so well that outside noise is effectively cancelled out, which makes it easier for them to shut out any distractions on the way to the locker room and hanging out by their locker as well (especially if you play under a coach like Stan Van Gundy, who must be a joy to be around after a loss). And anyone surely needs this on a plane trip, whether you’re travelling on Micky Arison’s private plane or flying coach with a crying baby nearby. 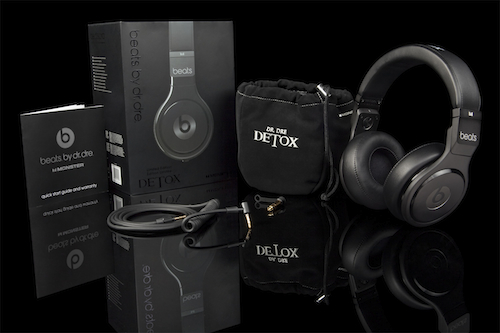 The Limited Edition Beats by Dr. Dre Detox Pro over-ear headphones are available at participating retailers for a suggested retail price of $499.