LeBron James shows up in another summer league game

Share All sharing options for: LeBron James shows up in another summer league game 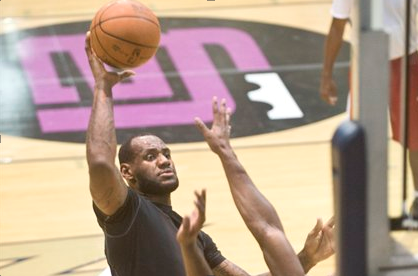 Even in the midst of the NBA offseason, the summer, and a lockout, LeBron James is still finding ways to entertain basketball fans with his amazing skills.  This time he took his talents just outside of Los Angeles, to the town of Watts, California.  That's where the 500 or so fans attending a game in the Drew League got a treat in the shape of King James on Saturday night.

LeBron isn't the first NBA star to show up in one of these small summer leagues, as Kevin Durant, Ron Artest, Nick Young are just a few of the guys who have paid a visit to some unsuspecting fans.  With no NBA activities to participate in, players have to find other outlets to play some ball and do so against the best competition they can find.  Also, many of these guys enjoy giving some true basketball fans a thrill by putting on a display of dribbles and dunks.

That's exactly what LeBron did on Saturday, and the fans loved it.  He ended up scoring 30 points and adding 10 assists, 7 rebounds and 2 blocks, a typical scoring line for James, but in a much smaller gym then the norm.  This kind of surprise appearance is becoming a little more common for LeBron though, as it is for several players who are out there looking to thrill fans and play a little ball.

James did just that, putting on a show for the fans with monster dunks, tricky passes, long jumpers and even some exciting defensive plays which included a couple of those fly-swatting dunks he's known for.  The fans were most appreciate too, yelling and screaming for LeBron, letting him know that his presence was more then welcome.  These are the kind of surprises that will have fans all over the place showing up to the smaller summer leagues in hopes that some NBA star will make a guest appearance.

It want more then a week or so ago when James showed up in a game just outside of Cleveland to play with some of his old St Vincent-St Mary high school teammates.  He has already said that he isn't interested in playing overseas, so I wouldn't be surprised to see LeBron show up in a few more games like this around the country.  Who knows, maybe at some point he'll get a couple of his fellow Heat buddies to join him...