A Split Second Of The Heat Season Preserved On Canvas

Share All sharing options for: A Split Second Of The Heat Season Preserved On Canvas 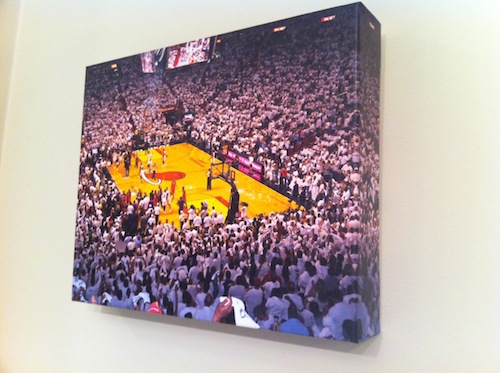 The friendly folks over at Easy Canvas Prints offered to send me over a canvas to showcase on our esteemed Miami Heat blog and I was happy to oblige. After all, I had taken plenty of pictures during the madness that was the 2010-11 NBA season and surely one of them would be a nice candidate to put up on my wall.

After much deliberation, I decided to go with a picture of the view I enjoyed of the Playoffs from press row at the AmericanAirlines Arena. Outsiders like to put down Heat fans for not showing up on time to games (like Celtics fans also do) but they certainly showed up before tipoff in the postseason and were on their feet cheering on their home team just like in this snapshot of an early timeout being called by the Philadelphia Sixers (aka "LeBron's breakfast club") during a first round game.

Ordering the canvas was a snap with a variety of customizable options and I was done in a few minutes. It was actually kind of fun to mess around with all the options to get it just right. I went with an extra thick border that also mirrors the edges of my picture to give it a nice little 3D effect. Within days it was waiting for me, right next to the morning paper, outside my front door as if Santa Claus himself had delivered it. 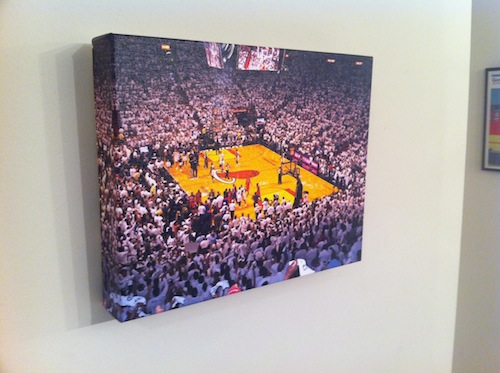 It's definitely going to be hung over my study as I reminisce of the good old days when NBA players were gainfully employed by teams that were perfectly willing to sign them to rich contracts to secure their services but now can't afford them.

If you're looking for a one-of-a-kind gift or simply to cover up that hole in the wall you made during the NBA Finals, go ahead and upload your own photos of your favorite game, stadium, your family and friends, or whatever you like, and get it printed on gallery wrapped canvas in a snap.