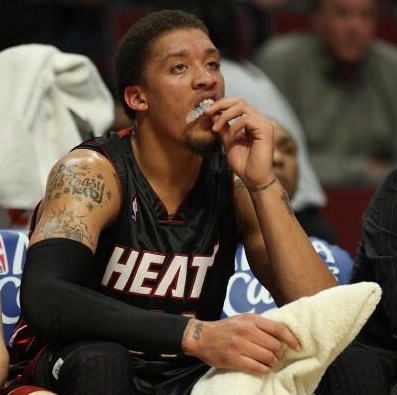 The former Miami Heat forward was cited for marijuana possession and speeding last week, driving at 84 mph in a 65 mph zone. Beasley also had 16.2 grams of marijuana in his vehicle.

Just shy of a year ago, Minnesota Timberwolves president David Kahn said that the former No. 2 pick in the 2008 NBA Draft was maturing. "He's a very young and immature kid who smoked too much marijuana and has told me that he's not smoking anymore," Kahn said. "And I told him that I would trust him as long as that was the case." The NBA fined the Timberwolves $100,000 for what it called inappropriate comments.

Before playing in a professional game, Beasley was dismissed from the NBA rookie symposium for his involvement in an incident with Mario Chalmers and Darrell Arthur. Security officials said they detected the scent of marijuana in the room Chalmers and Arthur stayed in, but found no drugs. During the 2008-09 season, both Beasley and Chalmers were fined numerous times for minor violations of team rules.

A year later, Beasley checked into a Houston rehabilitation hospital Aug. 24, 2009 to address substance and psychological issues at the request of Heat officials. Addiction treatment at the best drug rehabilitation center costs more, but celebrities and athletes can easily afford it and Beasley wisely chose to seek help. However, shortly before he checked into the center, the 6-foot-8 forward from Kansas State showed a tattoo on his back on his personal Twitter page. Two plastic bags could be seen on the background of the photo, and some speculated on the bags’ contents; however, nothing conclusive can be drawn from the picture itself.

Although Heat center Zydrunas Ilgauskas exercised his player option to return for the 2011-12 season, he said that he is "kind of on the fence" about retirement before throwing the ceremonial opening pitch of the Marlins/Phillies game last night. During Pat Riley's end-of-year press conference June 21, Pat Riley said that Ilgauskas still has "a lot left in the tank."